A review of the Electro-Harmonix Cock Fight pedal 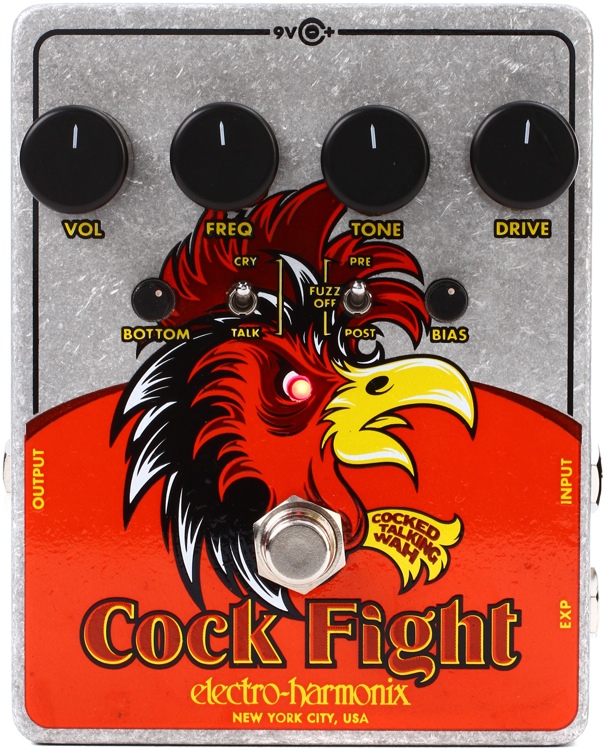 Wah pedals are useful for more than just the standard “wah wah” effect. Sweeping the pedal’s filter to find a cool tone and then leaving it static as you play is also very effective. Known as the “cocked wah” effect, that’s the basis of Electro-Harmonix’s Cock Fight pedal, along with built in fuzz and a talking wah.

The Cock Fight is a mid-sized stomp box, with I/O that includes not only the standard 1/4” input and output jacks, but an expression pedal input, as well (more on that in a bit). The pedal comes with a 9V power supply, but can optionally be powered with a 9V battery. You have to remove four screws to get to the battery compartment, however.

The pedal features four large knobs across the top: Volume, which is a master volume for the pedal; Frequency, for adjusting the wah effect (think of it like the foot pedal of a wah in knob form), Tone, for changing the tone of the fuzz effect; and drive, for adjusting how much fuzz is applied.

Beneath the large knobs is a row of controls containing two small knobs surrounding two small  toggle switches. The knob on the left is called Bottom, and is a low-frequency boost that’s designed to restore low-end to a bass that’s had its bottom end reduced by the filtering in the wah effect.

The first switch is a two-position toggle that lets you select either a standard wah (Cry) or a talking wah (Talk), which makes an “ow” sound and gives the pedal another sonic dimension. With the Talk wah on and a lot of fuzz, you can get some almost synth-like tones.

The other switch is a three position toggle. In the middle position the fuzz is off, in the bottom position (Post) the fuzz is after the filter circuit, and in the top position (Pre), it’s before the filter. According to the manual, the Pre position is “modern” sounding, whereas the Post position gives you more of a Hendrix-style vintage sound. The Pre position sounds rounder, and the Post thinner and smoother. Maybe it’s just because I’m more of a classic-rock guy, but I found the Post position generally produced a more usable tone. Of course, a lot of it depends on the other settings.

In this example, the Cry wah is featured  with the fuzz in Pre, and when it repeats, the Fuzz is in Post:

The final control is a knob called Bias, and controls the bias voltage being fed to one of the transistors in the fuzz circuit. Turned all the way up, it provides a normal bias, which produces a standard fuzz sound. As you turn it down you get more and more of what EXH calls the “dead battery effect,” where decaying notes don’t ring out fully, but instead shut off prematurely, almost as if they’d dipped below the threshold of a noise gate. In fact, when I first was trying out the pedal, before I’d read the manual, I thought maybe a gate was built in. The fuzz effect also sounds less smooth and more grungy with the Bias turned down. It's not a setting I could see using, but to each his or her own, I guess.

Here’s a line that repeats. The first time the Bias is all the way up and on the repeat the Bias is turned down to about 9 o’clock:

With the Bias fully up, the fuzz sounds really good. As the makers of the Big Muff Pi, EHX knows something about fuzz effects.

Here’s an example with the Drive turned to 3 o’clock, the Tone at 12 o’clock, the wah set to talk and the fuzz switch on Pre:

Between the two different wah types, and the Frequency and Tone controls, you can dial in a lot of different colors with this pedal.

Here’s an example where I change the Frequency and Tone controls during the example to show some of the different “cocked-wah” flavors available:

The cocked wah sound is very cool, but is kind of a specialty effect, only something you’d use once in a while on a gig. It would have been much more versatile if EHX had added an auto-wah option to the pedal. I'm not sure what that would have entailed technically, but it seems like with the filter already onboard, it wouldn't have been too difficult or costly. However, if you have an expression pedal, and you connect it to the Expression input on the Cock Fight, that makes the pedal into a versatile wah or fuzz wah.

As you can see from the list of expression pedals above, prices vary a lot. If you’re lucky, you already own one, and if not, some models, such as the M-Audio EX-P or Moog EP-3 are pretty inexpensive.

Plugging my Roland EV-5 into the Cock Fight created a versatile fuzz wah pedal. I used the expression pedal for the next three examples:

Here’s an example with the fuzz and the Talk Wah, where I got a pseudo talk-box effect:

In this example you’ll hear the fuzz and the Cry wah with the fuzz in Pre:

Here’s how the wah sounds with the fuzz off:

When the rooster crows

I like the Electro-Harmonix Cock Fight ($112) pedal quite a bit. It’s relatively inexpensive, the fuzz sounds great (especially in Post position), and the two different wah effects offer sonic variety. The ability to add standard wah-pedal functionality with an external expression pedal is really handy. That said, if the Cock Fight had an auto-wah feature, you could get a lot of the same effects without having to buy an expression pedal. I wasn’t crazy about the so-callled "dead battery sound" from the fuzz with the Bias turned down, but, heck, I can just keep it turned up full. Overall, I would venture to say that Electro-Harmonix can feel…cocky, about this new pedal.