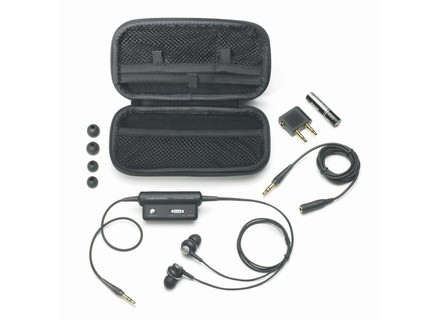 ATH-ANC3, In-ear or ear-Pad monitor from Audio-Technica in the ATH series.

For travelers who want to listen to their favorite music without bothering others or being bothered, using an ordinary pair of headphones doesn’t always give you total isolation. So then came along in-ear headphones (that go directly into the ear canal and therefore isolate the listener). Then, after that, noise-canceling headphones, featuring electronic circuitry that reduced extraneous noise, appeared on the scene. Audio Technica now offers headphones with both these features, but is it enough to provide total isolation?

For travelers who want to listen to their favorite music without bothering others or being bothered, using an ordinary pair of headphones doesn’t always give you total isolation. So then came along in-ear headphones (that go directly into the ear canal and therefore isolate the listener). Then, after that, noise-canceling headphones, featuring electronic circuitry that reduced extraneous noise, appeared on the scene. Audio Technica now offers headphones with both these features, but is it enough to provide total isolation?

Many people have been looking for an ideal solution to listening to music while isolating themselves from ambient noise, whether they’re in a street, a plane, or on a motorbike. This would allow for optimum conditions when listening an appreciating music, and would let you listen at low volumes, even in a noisy environment. Is noise-canceling technology therefore the answer to the growing concern about ear damage due to headphones? When you see (or rather "hear") the volume at which some people listen to music through their headphones in the subway in order to cover up all noises, there’s no doubt.

The way noise-canceling technology works is simple. Developing this technology was complex and tricky due to the fact that processing power in the past wasn’t adequate enough, at a reasonable price, to work in real time on a signal in headphones this size. On the outside of each headphone there’s a small microphone that captures exterior sound (noise). A processor reintroduces this signal into the headphones, but in opposite polarity, therefore creating destructive interference which is supposed to cancel out the noise. In theory, noise reduction can reach a maximum of 20 dB; as for the reality of this claim I’ll be giving my impressions.


In Use and Features

The headphones come with 3 types of interchangeable rubber ear pieces so as to provide a snug fit. Once they’re placed in your ears, they stay put.

After putting in the battery, and asking a friend to speak to me while I activated the noise canceling feature (without music) in a quiet place, there was definitely a voice level reduction, but I could still understand everything that was being said. We’ll see later that this system is indeed an effective way of reducing noise, but don’t expect it to totally cut you off from the outside world, not to mention canceling out an isolated sound (such as a voice). In an emergency, the "monitor" button immediately cuts both the music and the noise-canceling feature (provided that you have the small control box in hand), which comes in handy if, for whatever reason, you need to hear what’s going on around you.

In theory the battery lasts 50 hours, and I still haven’t managed to use it up after a month of consistent usage.

Quality of Sound and Noise-Canceling

The phones were tested for a period of a month, with all types of music (from classical to super compressed electronica), and in many different areas and listening environments (from very quiet to very noisy).

As far as sound quality goes, the results are very good, in terms of dynamics, bass or highs. This is a point of view from a music lover’s perception, since the phones are not advised for mixing. If you really want to record yourself with headphones like these, you should be aware that they aren’t very sound-proof: at high volumes, other people in your vicinity can hear the music, which means that they’ll more than likely bleed into a microphone if you use them for recording.

The nice surprise, on the other hand, is that with music that has a lot of space, breaks, silences, and dynamic variations, like jazz or classical music the sound is clear and precise, even when flying in a plane. I also tried using the headphones by themselves (Audio-Technica suggests this usage in its manual), without any music or sound, just as a simple noise canceller. The result is rather convincing, life seems quieter, be it in the street, the subway or in a plane. The only hitch is a slight hiss when the noise canceling is activated. It’s very slight, but all the more noticeable since one is isolated with it.

Instead of just being an ordinary foam earpiece that only serves as a low-pass filter, the noise canceling circuitry efficiently filters between low and high mids and lets highs pass. To the ear, the circuit filter doesn’t give the impression of effecting frequencies above 15-16 kHz. Is this a limitation of its processor? Even though I put the question to Audio Technica, nobody got back to me. But in any event, it suffices for a mobile musician. I’ll finish by saying to you, dear musicians, that most of you don’t hear above 16kHz anymore due to playing at high volumes. A part of the population is therefore unable to tell if there’s any filtering above that frequency.

The ANC3 does a nice job of filtering, especially bass and mids, of exterior noises. Of course, all in-ears have the same faults: because our ear canals are plugged up, internal sounds are louder (breathing, footsteps, swallowing, and chewing). These are of course minor noises and aren’t heard when listening to music. They’re only noticed when the headphones are used as just a noise canceller without a sound source, (when walking, for example).

All in all, the noise canceller is quite effective: in the street, motorbikes and other noisy vehicles are hardly audible (everything sounds "soft" and muted), in an airport full of people talking, the brouhaha is mostly filtered (but not completely canceled), in the plane, the pink noise of jet engines and air conditioning is largely reduced.

The only case in which the filter isn’t effective is outside in a windy environment. A possible explanation to this is that wind effects the integrated mics in a frontal manner, similar to someone blowing into a microphone. Since your ear is plugged up by the earpiece, it doesn’t perceive the wind noise; unfortunately, the mics pick it up and the noise canceller sends the wind noise in opposite polarity into the phones… In cases like this, the best thing to do is to deactivate the noise canceling circuitry and make do with the normal noise cancellation of the in-ears.

I’m so impressed by these headphones that I’m going to keep them! To tell the truth, since I got them, I constantly have these phones on me. Any trip, voyage, or commute, is an excuse to use them. And without them I feel aggressed by the noise pollution of a big city.

Of course, I would have liked there to be total noise cancellation, but the ANC3 is already most effective. Also, the quality and convenience of its packaging and extras (a two-pin airline adapter, a hard carrying case, a Y cable extension, and a gold-plated mini-plug) make it even more practical. I really get the impression that the engineers at Audio Technica really thought this product through and didn’t cut corners on quality before putting it out on the market. At 99 € (street price), the ANC3 is a good value and will pay off in the long run.

[-] Slight hiss when noise-canceling is activated