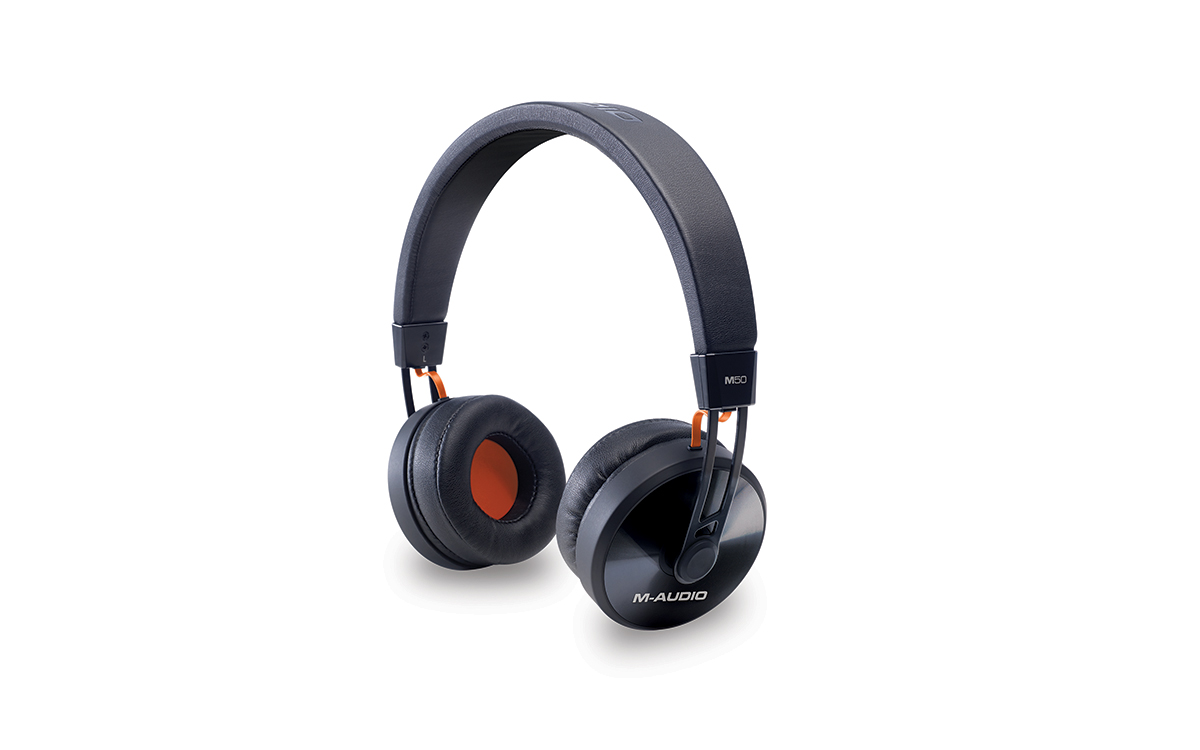 Every recording musician needs headphones, and there’s no shortage of choices. It’s not hard to find a good pair if you’re spending $200 and above, but especially in the sub-$100 range, it’s more of a crapshoot. M-Audio recently released two models in that range, and we’ll focus our review on the more expensive of the two, the over-the-ear (circumaural) M50.

The M50 features an adjustable headband that’s a tad stiff to adjust, compared to other headphones I’ve used, but works fine. The ear cups feature thickly padded foam cushions that are quite soft, and could certainly be worn for long periods of time without discomfort. The M50 is not designed for DJs, so the ear cups don’t flip around.

I compared its isolation with my KRK KNS-8400 ($149, also circumaural), and my subjective evaluation was that the M-50 offered close to or equal isolation.

At the bottom of each ear cup on the M50 is an 1/8” TRS female headphone jack into which you can connect the included 1/8” cable, which can also be used for 1/4” connections using an adapter that also comes with the M-50s. I like that you have the choice to connect to either ear cup. Having two jacks also makes it possible to daisy chain the M50s to another headphone pair, which could be handy in certain situations.

The M50’s connector cable is made of a rubberized material and is flat as a ribbon. Because of its thinness it gives the impression of flimsiness, but it’s hard to say for sure.

In any case, 1/8” cables are not expensive to replace, and the fact that you can use a standard one in the M50 is a big advantage should the cable break. Most studio headphones that I’ve used feature dedicated cables that are expensive to replace, and have to be ordered from the manufacturer or dealer. A standard 1/8” cable, on the other hand, can be found almost anywhere; drug stores, convenience stores, department stores, music stores, and electronic stores.  If the cable were to go on the M50s, you could easily and cheaply replace it, which is great.

In the driver’s seat

The M50s feature a 50 mm driver, which is large for headphones in their price range. They offer plenty of output, excellent bass reproduction and highs that are crisp — perhaps a bit overly so. I found elements like hi-hats seemed to jump out more than I expected.

I also compared them with a set of M-Audio’s other new headphone, the M40, which cost $20 less per pair. The M40s have smaller ear cups and are considered on-ear (supra-aural) rather than over-ear headphones. The M40s also have a smaller driver. Sonically, the M50s are noticeably fuller sounding, and for the extra $20, I’d say you’re much better going for the M50s.

The ears have it

Overall, I found the M50s ($79.99) to be a solid bargain. They provide sonics that are better than what you might expect from a lot of models in that price range. With their comfort and isolation they’d make great tracking headphones, and could be used for mixing, as well, although they wouldn’t offer as much accuracy as high-end reference headphones. If you’re looking for bang for the buck studio headphones, the M50s will not let you down.

Log in
Become a member
Viewers of this article also read...
8/10
review A review of the Audio-Technica ATH-M70x headphones
learning Setting up the headphone mix
learning The best studio headphones for about $100
learning What is a Home Studio?
8/10
review Video review of Audified MixChecker
learning Multitalented producer Greg Wells talks about his craft and his gear
learning The Last Note
learning We interview the author of “The Great British Recording Studios”
learning How to track and mix your project so it has a cohesive and memorable sound
Voir tous les tests