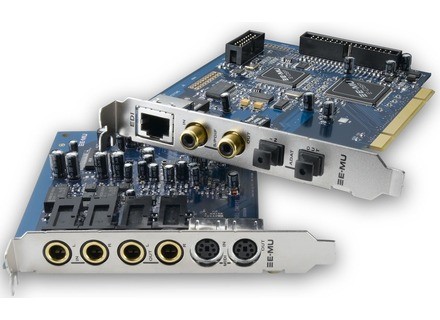 View other reviews for this product:
PRESENTATION:::
HUGE, this is the word for this new card dcrire Audio E-MU, the 1212M. In fact, due to changes DIFFERENT stratgie Group Creative Labs (who made the old clbres Creator software and Notator), E-mu Systems was awarded the emblmatique of what it would be best in Audio Contents of acquisition, Limin hlas and all hope of dveloppement Hardware sound modules as we had in the past. But as the software takes over the hardware, it is ultimately a blessing in disguise. E-MU markets so a new series of the 1212M Audio interfaces (such as mastering m), the 1820 and 1820M Emulator Soft more software that will be associated in a spcial package with the 1212M and 1820M as name Emulator X and Emulator X Studio. The software will be marketed sparment thereafter.

As the choice of t Apple will integrate free software Emagic Bunddle and in the following I-LIFE (under the concept of Garage Band), we are witnessing today will finally approach the Pro Audio products by all manufacturers of PC. Thus, the E-MU cards are available today for PC (Tour), versions for laptops arrive ultrieurement, on the Mac ... not glop.

The card is 1212M dedicates to:
Dj = a musician possdant analog mixer and gets the A / D converters of dveloppant HD192 Protools and 41 dB dynamic range in between its audio tracks. (Huge!)
Musician = possdant a dj mixer digital and obtained from I / O + ADAT converters dveloppant HD192 Protools and 41 dB. (A map Adat 199 euros?)
= Musician who just wants to make the acquisition with the best audio embedded processor and the most compatible on the market.
= Short a musician who wants to have fun with the best possible sound.

I have now used the 1212M card with three consoles: A Mackie 1604VLZ Pro 4 with the use of analog subgroups, a Yamaha 01V quip card Adat 8 I / O MY8AT Alesis HD24 Multitrack and for test conversions Adat to try to bugger the Systmes protocol ... there is no plant. In the end, the 1212M Converto are a standard job Whereas we still talking about a product price 199 euros public observation.

Obviously, the product has a week so we&#39;ll see if the drivers are stable, but I had no problem with installation. On Win 2000 no problem. Recall that if we buy a machine that&#39;s cif do anything other than cif. Well a computer to make music is the same thing. Ddi a PC is the most simple. We can tell you that it is prfrable to have multiple hard drives (one for Multimedia Applications, Office Pack, you give, and so on. / An application for your music and backups / and the last as working with HD audio tracks to be Fully reformat other time to enjoy his performance. Yeah ... It works, but believe the first shot of an auto-download of Internet Explorer or anything and that&#39;s the area. So for those who want to work in audio and MIDI on a PC without Internet galre = No / No Game / No Word, Excel, Outlook / Purpose MUSIC.

In this case, I have not Russian apprcier latency and that&#39;s good. I put the card on an Intel P4 2 GHz / 512 MB of RAM and as I had the dj soft version of the Emulator Beta, I could start playing the Fader on the param tres of the sampler. How to say ... It happened something. That sense of complacency that we feel when the sound is [/ b] standard .

I use the 1212M for a week, and I look forward to the 1820M card team for the Soft Emulator XS rcuprer the combo inputs XLR (see link)
http://www.emu.com/products/product.asp?product=2211&category=754&maincategory=754

E-MU has definitely taken a new turn in its history and dveloppement. No one could have prtendre cel. Given the atmosphere of the Digidesign booth at the show-Pro Audio SIEL of Paris, it is clear that this dveloppeurs clbre brand have had to turn in more than just E-MU . In any case, the Card 1212M beyond to be a super audio grabber, it is also a mastering processor that Exceeds the understanding that price l.
If I t E-MU, yes ... and I still am.

He&#39;s my friend Eric Inglebert home Recording Musician will have fun by testing ...
(Eric, if you look at us ...)

Dr. Frog
See the source
Did you find this review helpful?yesno