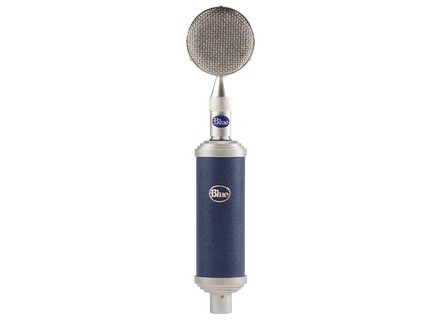 The Stage One Bottle Rocket is a transformerless solid state microphone system that is compatible with the Bottle Caps, the same interchangeable capsule system used with Blue'sBottle mic. It comes with Blue's B8 capsule as well as a custom shockmount and wood storage box.

The Stage Two Bottle Rocket is a transformerless tube microphone with a character all its own. Like the Stage One, the Stage Two is also compatible with the Bottle Caps. Stage Two comes with Blue's B8 capsule as well as a custom shockmount, 5-conductor tube mic cable, Blue's Powerstream power supply and an ATA-style flight case. The Stage Two is designed for recording vocals, electric guitars, acoustic guitars, strings, drums, woodwinds, and more.

The first 25 Bottle Rocket Stage Twos will feature a limited edition lustrous "stardust" paint finish, and include a second capsule as well as a signed letter of authenticity from Skipper Wise, President & Founder of Blue Microphones.

Pricing and availability
The Bottle Rockets are available at authorized Blue dealers for $899 MSRP (Stage One) and $1999 MSRP (Stage Two).

For more information, visit their web site at www.bluemic.com.