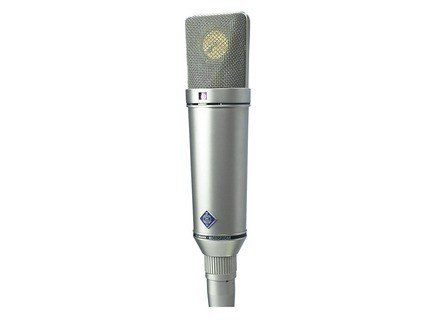 U 87, Large diaphragm condenser microphone from Neumann in the U 87 series.

View other reviews for this product:
This is of course the legendary U87. Many would argue that this is the industry standard for recording great vocals. It is a large diaphragm condenser with a switchable polar pattern (cardioid, omni, and figure 8), an attenuation pad, and a high pass-filter (both switchable).

I have owned one for about 2 years. It is very hard to beat this mic on vocals. Recordings sound wonderfully accurate, clear, and open, with very sweet highs. In addition to being great on vocals, it really does sound good on almost anything you stick in front of it. I use it frequently for acoustic guitar and solo violins, and sometimes on electric guitar cabs. I only have one and haven't tried it, but many people use these as high-end drum overheads or room mics.

They are also quite popular for use in recording classical music, when very accurate response is demanded. The switchable polar pattern is a great feature on this mic, as it makes it almost 3 mics in one. If you have a couple of these, putting one in figure 8 and one in cardioid lets use the M/S stereo technique, which is great for adding variable width to recorded sources. I have used a wide variety of large diaphragm condensers, and this one really does live up to its reputation. Singers who have never used one are often wowed when they hear their voice back by just how accurate and lifelike their voice sounds when recorded by a U87. They are built to a very high standard, so you can count on them not to junk out on you as well - they're built to last.

At nearly $3,000, they are certainly not cheap. But for anyone who wants to get some truly great sounding vocal recordings, this is the thing to save up for. You won't regret it. I would absolutely buy it again - I'm almost never disappointed with the results I get with the U87.
Did you find this review helpful?yesno