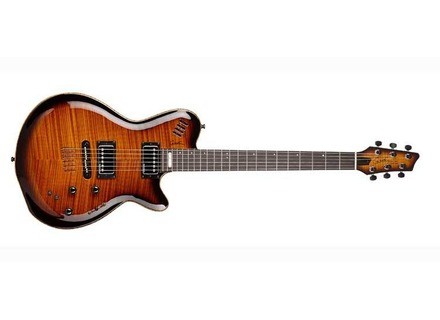 LGX-SA, Other Shape Guitar from Godin in the LG/LGT/LGX/LGXT series.

Buy this productView price information >
View other reviews for this product:
This guitar is made in Canada, and mahogany body, flamed maple beautiful table (with blue paint, and more), ebony fingerboard.
Bolt-on neck and tail section for better access to acute.
String-through.
Bone nut.

As previously stated, the neck is thin and relatively flat, relatively wider than a stratovolcano, but narrower than my Ibanez Musician. In short, very easy and comfortable to play, unless you want "blueser" as with a Tele or a stratovolcano, and again.
According to the site Godin, the handle was changed after 2002 (mine is older)

Magnetic pickups:
- 2 Seymour Duncan humbuckers specially designated for MC Godin brand and have a fine grain and accurate while being able to send the wood he needed with good saturation.
- A 5-way switch for 2 microphones, so splits with micro and sensations near the stratosphere (but not completely either).
- One volume knob, one tone knob
- A dedicated output jack (when a jack is plugged in, the signal of magnetic pickups is removed from the "MIX" output).

Micro Piezo:
- A sensor piezo rope for his "piezo" and "synth access" (SA).
- A volume
- 3-band EQ
- An output jack "MIX" semi-dedicated. Which also leaves the sound of magnetic pickups (cut with the volume knob magnetic pickups or when a jack is plugged into the other outlet dedicated "magnetic micro").
Sound piezo sounds a bit like a electro acoustic (but not completely either)

I want to remove a point for the lack of tremolo. But this model is expected to not having (Tremolo on LGXT Godin).
I take anyway for mechanical point which had to be changed due to lack of strength. Otherwise, it is perfect.

The handle is a highway, very nice.

The ergonomics are top, the guitar is well balanced when I sit (home studio) or standing (repététions). Ultimately, I would say it tends a little with the back (with the handle going back a bit), but it may not be an impression compared to nosedive guitars (Ibanez Musician).

The sound is good, too good ... It is almost the only criticism I could make this guitar, failure to its qualities: the sound is "perfect" in all circumstances; clean, warm, slamming bright. In short, never disappointing.
Why blame him then?
I want to say that the lack of "personality". Godin LGXSA is the most versatile and I know it lacks that &#39;whatever&#39; that makes you want into him, to go to push it to its limits.
The sound is far from being cold, but perhaps too clean.

Maybe I should dig it by mixing more or better piezo pickups with magnetic pickups.

I would say that each connection, the sound is perfect. Can I play, I cheat, I add effects, I removed. Then I put the synté I take my foot. I leave in delusions that leave me unsatisfied when I come back in his "base". Besides, what his base? There are so many possibilities that I come to think that I would have 3 guitars like it, and 3 pairs of arms and be both guitarist, programmer, sound engineer ... At the same time!

So this is a guitar that offers with a dizzying array of possibilities, but that needs to be tamed. Never disappointing, but who must leave his mark.

The perfect guitar, with the lack of its qualities so versatile it loses in personality. So much the better for me to assert myself!

So I&#39;m doing with my electro Godin. I could make the variet &#39;, but not rock-pop-punk. I like to connect synths on the SA, tons of effects on microphones, a few funk échapées and ornamental arpeggios with piezo and magnetic pickups, but rock and sweat point (at least for the moment).

I can not put myself in agreement with myself on the fact resell and make do with what I have (already several models including a Strat with GK2 sensor), or keep the body working to exploit its enormous potential ...

Therefore difficult to say whether I would do this choice. This guitar is so perfect that any self-respecting guitarist should have one! Blowin but the price, too!
See the source
Did you find this review helpful?yesno
Cookies help us improve performance, enhance user experience and deliver our services. By using our services, you agree to our use of cookies. Find out more.