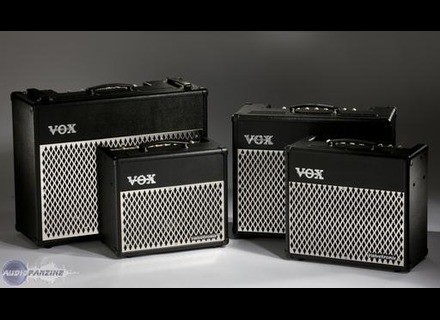 - Power break function (even on the 15-watt model!)

So you get a total of 66 different sounds...

- You can save eight presets to access them quickly.

- I found the previous Vox ADVT series easy to use but it's a totally different story with this new range ^^... These new series provide six times more possibilities than the previous one. It's great but it makes settings a bit more difficult. Nevertheless everything gets easier after some time.

- Usually you get the sound you're looking for (although it also depends on the guitar you use...) but you have to spend some time with the amp.

- I think this amp is good for any music style if you use the adequate guitar. Except for extremely hard music, this amp makes wonders! So it's perfect for me (I'm very versatile: Dire Straits, Guns n Roses, Fall Out Boy, Lynyrd Skynyrd, Queen, etc.)

- I use it with a Fender Strat Mex Classic Player 60... and it sounds great. I will soon have a Les Paul Slash and I'm eager to test the amp with it!

I start with the pros regarding sound:

- The AC30BM model (Brian May) surprised me a lot... The AC30TB simulation of my previous amp (Vox AD30VT) was disappointing because I wanted a Brian May sound... And with this the VT15, I'm fully satisfied! Thank you Vox

The presets that simulate the sounds of famous songs are rather authentic.

- The reverb is independent of all other effects.

- It's not important but the knobs have a vintage white finish, which I find nicer than the black plastic knobs of the previous series ^^.

- I loved the modern UK model of my Vox AD30VT and the new one on the Vox VT15 is not exactly the same...

- It's not easy to use the compressor without the chorus effect...

- No wah effect... It's a bit disappointing because I didn't notice it when I bought the amp (but I would have bought it anyway)

- The Enter Sandman simulation has not enough gain and reminds me of the AC15... (perhaps because I play a Strat... but I don't think it's normal).

- Every time you select a new amp model there is an increase in level... unpleasant volume changes.

I've been using it for over one week. I like the new features (new effects, new amp models...) but I needed some time to manage the settings.

I previously owned a Vox AD30VT and I was very satisfied with it. As soon as I heard about the new series I sold my AD30VT to buy the VT15. I feel confident in Vox products and I have never been disappointed.

- I would buy it again (even though I don't have that much experience with this particular product to answer this question)... Perhaps I would buy the 30-watt version which has a better low-end, but considering its price, this amp is nearly a gift. I wouldn't hesitate to buy it again. It's a very good deal!
Did you find this review helpful?yesno
Cookies help us improve performance, enhance user experience and deliver our services. By using our services, you agree to our use of cookies. Find out more.