Characteristic notes in the modal system

After the very brief historical and philosophical considerations of the previous article, it's time to get back to more concrete aspects.

Today we'll look at the way the different natural modes are built, as seen in article 46. In tonal harmony, as you saw in the first three articles of this series, major and minor modes are defined by very specific particularities: the major third and the presence of the leading-tone for the major mode, the minor third and the absence of the leading-tone for the natural minor mode, etc. If you recall what we said in the second article of this series, this natural minor mode corresponds to the relative minor of a major scale, in other words, to the aeolian mode of that major scale. From this it follows that if there are particularities that allow you to define the modes of tonal harmony, the same applies to those of modal harmony (see article 47).

Like in tonal harmony, modes are characterized first and foremost by the 1st degree. But they all have one and even two (ionian mode) additional "characteristic" notes, which correspond to an interval that only they have.

In the following example you can see the modes from the C scale, with their characteristic notes: 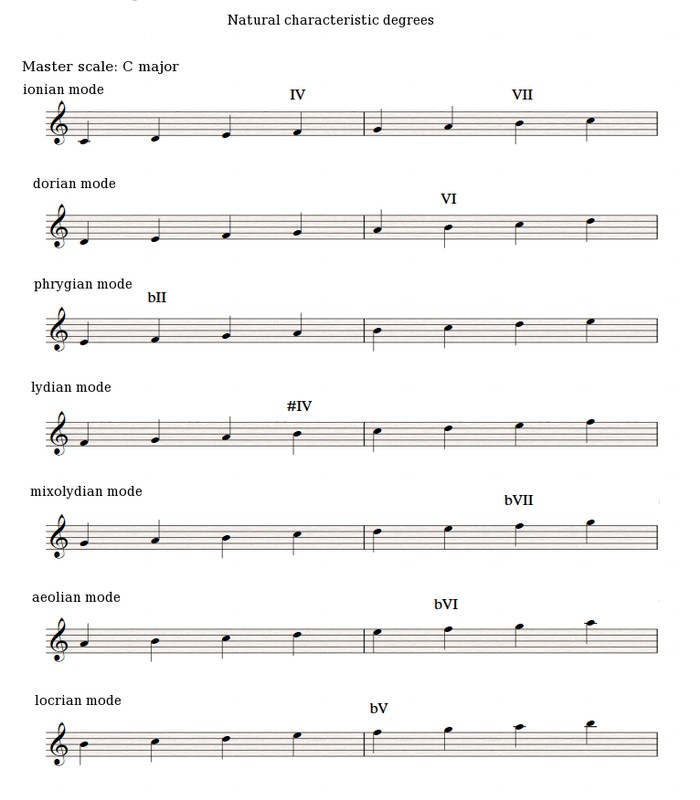 At first sight you might think: "But why does he say that the second minor is characteristic of the phrygian mode, when the locrian mode also has the same interval?" And you would be completely right. However, if you look at it closer, you can observe that the locrian mode (B locrian in this case) distinguishes itself from the phrygian mode (E phrygian in this case) by the diminished fifth (which is this mode's characteristic note).

And the same "issue" arises when you consider the major sixth of the dorian mode (D dorian in this case) as a characteristic note, since the ionian, lydian and mixolydian modes (C ionian, F lydian and G mixolydian in this example) also have a major sixth. Indeed, but none of the latter has a minor third from the tonic... and so on and so forth!

This is something that applies to all possible modes: characteristic notes associated to a specific 1st degree correspond only to a particular mode! What's more, to denote the relationship between the characteristic note of each natural mode and the 1st degree of the same mode, you can actually refer to it as the natural characteristic degree (NCD). Every NCD is followed or preceded by a semitone, called a "modal fragment."

So, to establish the mode of a song you need to emphasize the root, the third and the modal fragment.

Do note that modal fragments can also be inverted: