Before I begin I most warn you that this article might seem a bit grueling for some of you. But if you've been following the other articles in the series up to now, you shouldn't have a problem with what is about to come. Otherwise, you can always use the comments section to ask anything you want.

First we need to begin defining enharmony, which is basically the use of different names for the same note, like D# and Eb, for instance. Do note, however,, that this is only possible with the so-called tempered instruments (those which have a keyboard or strings with frets, for example). Non-tempered instruments (like the human voice, violin, fretless bass, trombone, etc.) allow you to eventually differentiate between a D# and an Eb. Now that we've got that clear, let's see how this translates into real life.

A chord with lots of possibilities for enharmonic modulation is the so-called "augmented sixth chord," based on the sixth chord. But be careful, you shouldn't confuse it with a CM6 chord. "Augmented sixth" refers here to the traditional notation system – something I'll come back to in a future article – where the sixth chord refers to the first inversion of a three-note chord. Why "sixth"? Well, because in this position, there's an interval of six degrees between the lowest and the highest note of the chord.

Thus, in the last example you have G-B-E, which is the first inversion of the E-G-B chord (E minor chord). In the traditional notation system, this first inversion is called G minor sixth chord. The G-B-E# chord is, hence, the augmented sixth chord. It is enharmonic to G-B-F, the C dominant seventh chord (without fifth). You can also go pretty easily from E minor to C shifting one semitone up, from E to E# (enharmonic F) to build a G dominant seventh chord. 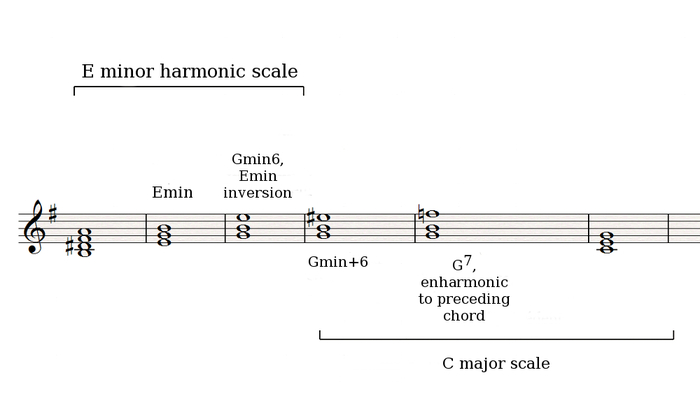 Another way to illustrate the role of enharmony in tonal modulations is with the use of the diminished seventh chord. Here's an example:

Unlike other chords, it is made up exclusively of minor thirds, with an augmented second interval when you chain the arpeggios, like in the preceding example. This makes it possible for every inversion to correspond to a new root position (see article 4). So it allows you to modulate towards four different keys!

But what does this have to do with enharmony, you ask? Well, the notes of the chord are called differently depending on the inversion. Originally, this chord is the seventh chord of the leading-tone of any harmonic minor scale (see article 2). Each of its inversions corresponds to the seventh chord of the leading-tone of a new harmonic minor scale. So the names of the chords change in order to respect the diatonic character of the new scale. Do you follow? The example below will help you see this more clearly: 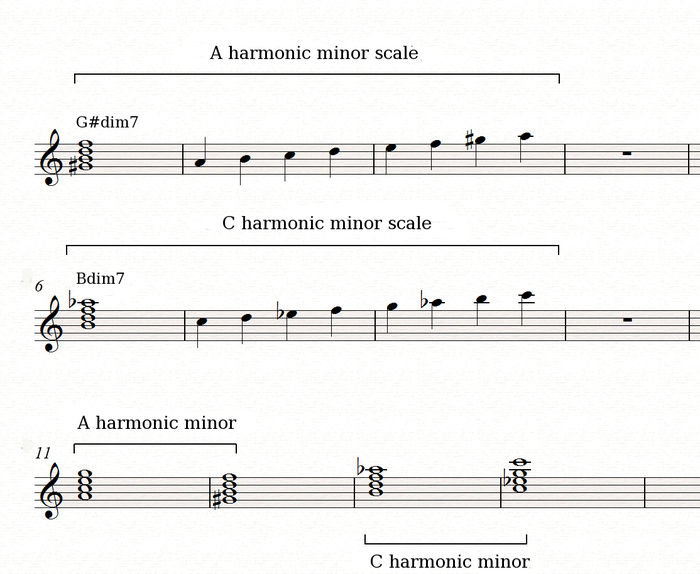