Today, we will discuss one of the most important aspects in music, namely rhythm.

You might be surprised to see this concept addressed in a series dedicated to harmony. Would you be surprised if I told you that absolutely everything is intertwined when it comes to music, that melody, harmony and rhythm are inseparable from one another? As we've discussed previously, each cadence produces a different effect. For a cadence to work, the chords that make it up must be ordered in a certain way. What is rhythm if not the arrangement of a song in the time dimension?

Before moving on, let's take a moment to recall how time is divided in music, namely into "beats." A beat is a subdivision that repeats at regular time intervals, as long as the tempo of the song doesn't vary. It's not unusual for tempo to be confused with rhythm, though, despite them being obviously not the same: A single song can have a fixed tempo but different rhythms.

But let's go back to the "beat," whose main function is to serve as the basic unit of measurement for all notes and silences. Below you can see a table that summarizes this. 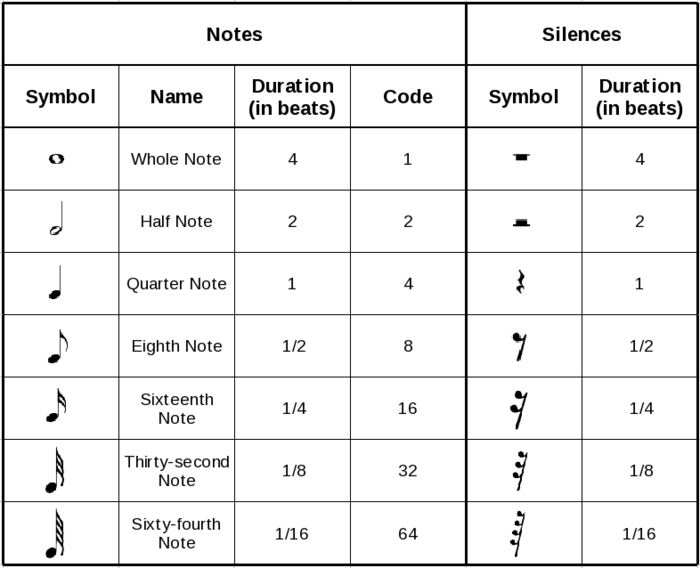 You are probably asking yourself what does the "code" on the image correspond to. First of all, it's important to know that beats are grouped into "measures" (or bars), which are represented as the space between two vertical bar lines in a score. These measures are commonly divided into 2, 3 or 4 beats (but there are many more exotic possibilities!).

There are two basic rhythmic forms: binary and ternary. In the first case, the time unit is the quarter note, in the second, the dotted quarter note. Put simply, the ternary form implies a rhythm in constant movement; just think of a waltz or the swing of jazz music. The binary form is mainly used for rock and most other current popular music. In classical music both forms are used.

The "code" on the table represents the four-beat fraction that corresponds to the notes. This codification is used to define the size of the measure. So, for instance, a measure with three beats would be codified like this: 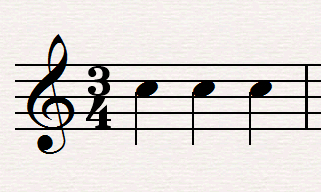 You are probably thinking that we have strayed quite a bit from our original topic ─ harmony ─ when discussing these rhythm issues.
However, as I wrote above, everything is linked in music. Because cadence is, among other things, the placement of chords in time.