There's no way to get around impedance when looking at speaker specs. Its rating is important to avoid frying up your amp, but also because the small details of an impedance curve reveal a lot about the performance of a speaker.

By no means do I intend to go into the details of impedance here, I'll rather try to give you an overall introduction to the topic and its practical implications.

Impedance derives from the concept of resistance, both of which are expressed in Ohms (Ω). So, just like the so-called "resistor" components, condensers and inductors also oppose the passing of current. But unlike resistors, if the voltage of the current is not continuous, their resistive power changes in relation to the frequency. Impedance varies depending on the voltage's variation speed. Applied to a speaker, the latter acts as a circuit with a resistor, an inductor and a condenser, and the opposition it presents to a signal changes with frequency.

Impedance is noted Z and obeys Ohm's law (V in volts, Z in ohms, I in amperes: V = Z × I). Unlike resistance, it's also characterized by its phase (in degrees), which is important to consider when conceiving a speaker or a filter, but less so for PA systems. Impedance extends to other fields outside electronics: it can also be mechanical or acoustic (opposition to motion and to sound propagation, respectively).

Considering that it varies with frequency, what does the impedance rating on the back of a speaker indicate? Well, it's a convention used for practical reasons. To really get to know the details, you'll need to read a curve ─ as usual ─ with the frequency in the x-line and impedance in the y-line Manufacturers reduce this curve to a so-called "nominal" value, to facilitate the use of their gear.

In the following image*, the orange curve belongs to one of the speakers (each of which can be fed by a different channel), while the green line corresponds to both speakers together driven with the same amp channel, in parallel. This subwoofer operates in the 28 Hz — 160 Hz range. Each speaker has a nominal impedance of 8Ω, but their combined impedance is only 4Ω.

According to Ohm's law, the amount of current the amp needs to supply is inversely proportional to the speaker's impedance (the load): I = V/Z. The lower the Z, the higher the current the amp must supply, until it overheats and breaks down. Most professional sound reinforcement amps can handle loads of up to 4Ω, and even 2Ω. In practice, the general rule is that you can connect two identical 8Ω speakers in parallel to an amp output rated at 4Ω, and three to an output rated at 2Ω.

The calculations used to determine this are the following: total impedance of the speakers = impedance of one speaker/number of speakers (this only works for identical impedances, otherwise the rule is a bit more complicated), i.e. 8Ω/3 = 2.67Ω. This is still above the limit of an amp that can handle a load of 2Ω, even if the real impedance can drop to 80% of the nominal impedance. Anyway, you should always be very careful when you toy with the maximum capacity of an amp. Not all manufacturers are as rigorous with their tech specs and the amp could heat up quite a bit depending on the gear, the level, and the conditions and time of use. The most cautious way to go about it is to cable the speakers in parallel. 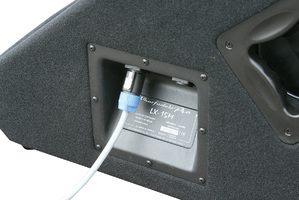 When a speaker has two inputs, without any other indication, connecting it to another speaker always results in a connection in parallel. This additional connector is intended for that purpose, as long as you only use speakers of the exact same model and you respect the limits of the amp. However, you should always check the specs before connecting any speakers in parallel to an amp (not all amps can handle a load of 2Ω, and not all speakers have 8Ω impedance either).

In the following image (taken from Wharfedale documentation) you can see the two Speakon connectors to eventually connect a second speaker in parallel.