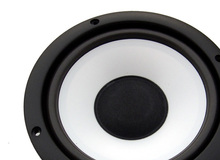 After our previous discussion of electrodynamic speakers, we'll now move on to describing different categories of speaker transducers, starting with the equivalent of the condenser mic in the speakers world.

The idea of applying electrostatic principles to loudspeakers had been around since the 1920s, but it wasn't until the '50s when a reliable and robust enough model was built to be able to compete with electrodynamic designs. Electrostatic speakers are made up of a diaphragm ─ a very thin plastic film coated with a conductive material ─ placed between two perforated stator plates through which the audio signal passes. The entire diaphragm moves back and forth between the grids, separated by millimeters and pierced in order to let the sound wave through.

The signal passes simultaneously through both stators (which could be considered as electrodes) but in antiphase with each other. The diaphragm, between both of them, is polarized by applying a continuous voltage to it. Hence, when a current runs through the grids/electrodes, the diaphragm's electric charge is repelled by an electrode and attracted by the other, depending on the direction of the signal. So, in theory, the diaphragm moves uniformly in proportion to the signal's voltage. This push-pull movement provides a better performance than when using one single electrode, which would have a hard time moving the diaphragm (single-grid electrostatic loudspeaker).

Unlike moving coil speakers, you might have noticed the lack of magnets. And just like a condenser microphone requires phantom power, the diaphragm of an electrostatic speaker needs to be constantly fed with an electric voltage to operate. It needs an external power supply. The polarization voltage must be high enough (hundreds or thousands of volts) for the sensitivity to be good, without reaching the point where an electric arc could form with one of the grids, irreversibly damaging the membrane and/or the amp.

At the same time, the audio signal going through the grids must have a high enough voltage to create a magnetic field big enough to move the diaphragm. This implies that the impedance of the electrodes has to be considerable (there is a proportional relationship between voltage and impedance, as described by Ohm's law). This high impedance requires an additional transformer between the amp's output and the speaker. This transformer must be carefully manufactured to preserve the response of the speaker across its entire frequency range.

The efficiency of these loudspeakers is not exceptional, considering the limited displacement of the membrane. A bigger speaker could obviously help tackle this issue, especially in the low end, but up to a certain maximum considering that the diaphragm can't be stretched uniformly enough beyond a given point without it affecting the identical displacement at all its points.

The polar diagram shows a figure-8 polar pattern, with two lobes in antiphase. It's hard to absorb the rear wave without changing the mechanical properties of the diaphragm; it is so light that it would be absorbed by the air caught on one side of he speaker. As a consequence, their placement must be considered much more carefully than with traditional speakers: there must be enough space between the speakers and the walls. Finally, the size of the panel makes the highs very directive, limiting the sweet spot. To get around this problem, some full-range speakers have resorted to the filtering of the signal and the use of several drivers of different sizes according to the frequency range, like moving coil speakers.

What makes electrostatic speakers so beloved among some audiophiles is their extended frequency response and their respect of transients. They have a reputation for being able to reproduce the smallest details with great fidelity and are less prone to non-linear distortion (if the speaker has been well built). Some even go as far as to say that their quality is unmatched.

In the next article I'll describe another family of transducers, namely piezoelectric loudspeakers.