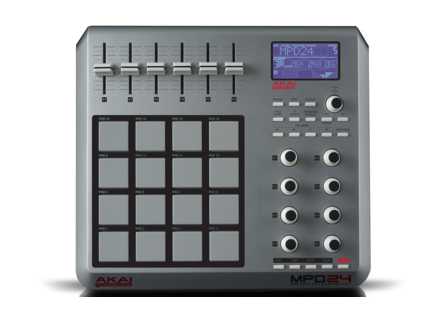 MPD24, PAD Controller from Akai Professional in the MPD series.

View other reviews for this product:
This is a review for the MPD24 MIDI Control Surface. It's a USB device that plugs seamlessly into your computer for use as a MIDI Controller in your various DAWs. In general, I think it's a great investment for the short price of $150.

What you would notice first is the striking resemblance to its older, bigger brother, the MPC series of Samplers and Drum Machines. They are both made by Akai, which is the reason for this resemblance. Once you realize that it is made by Akai, the well-known father of the drum pad machine, you will feel much better about purchasing the MPD.

As we get into the bulk of this review, I just wanted to say one thing. I had originally bought the MPD16. It does not have a screen, and it looks like an M-Audio Trigger Finger. (I will review the MPD16 next). I loved the MPD16 so much, and I thought that the MPD24 would be even better, and I was not disappointed.

First off, the MPD is built very solid. It's a great piece of handiwork. The faders and the knobs are solid. The buttons will not stick in, and the overall solidity of the product is unprecedented. You can probably take it around with you if you travel because it's a rugged little piece of equipment.

Delving into the features is what this next section will cover. First off, it has eight knobs and six faders that you can program to link to aspects in your DAW. That seems to be a great feature of this piece of hardware. Many other MIDI controllers will skimp on the knobs and not even have faders, so this is a big +1 for the MPD. Another feature that I really love is the presets for the drum plug-ins on your favorite DAWs. As I sit next to the MPD as I write this review, I'm going to name off a couple of the presets for your favorite DAWs:

Those are just a few of the presets. After that, you have over fifteen slots to program your own configurations in.

Under the screen, you have a selection of FOUR pad banks. You can change your programs here, too. Not to mention the classic 16 Level switch and Full Level switch.

When it comes to features, the MPD is teeming with them.

The last part of this review will cover the thing most are worried about, the price. Worry no more! One week's paycheck for most of you on a 9-5 will score you one of these. It's a shallow price at just $150, and I feel that it is worth it. You can go with the PadKontrol or the Trigger Finger, but I picked this one because I trust Akai, especially in the drum pad control market. I would recommend this to anybody, for the price.

Overall, I think that this is a great product. What I liked most about it was the feeling of the pads. They feel great, like a true MPC. They're a little thinner, however. What I liked least was the little ease of navigation on the screen. If you do not study the manual very carefully, you will get lost in a world of confusion when it comes to the fragmented words that display on the screen. The value, going for $150, is unchallenged. If I could buy it again, I would.
Did you find this review helpful?yesno
Cookies help us improve performance, enhance user experience and deliver our services. By using our services, you agree to our use of cookies. Find out more.