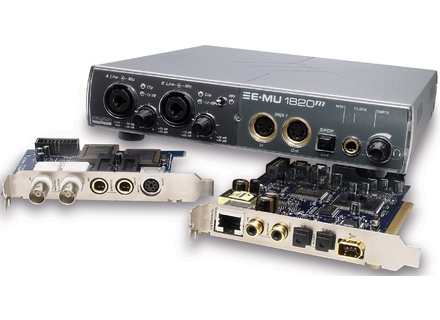 View other reviews for this product:
So first of all I chose this card to its number of inputs and outputs for the quality of these two pr-amp Tfpro (c inch of m. ... e) headphone output, ADAT etc ... Pkoi all these entries? The reason is simple: for recordings of models, and the biggest concern as the battery ncissite 8 entries!

So my config is pretty simple:

I use an ALTO L16 for mixing before entering the map.

I put a ten because there is no card on the market as to complte the same report qualitprix!

(Do not forget that with a PCI fontion that really relieves the CPU!)

Installation is no problem ... The only concern is the incompatibility with the video card Intgr the motherboard! And yes the GeForce 4 MX Intgr does not marry well with trs! Mute in the games and some critical shutdowns ... Since I added an AGP GeForce FX 5200 and: no more problem!

The setup is fairly intuitive, you just have some knowledge of the language of Shakespeare and rolls, plus there dej configs of "pre-configured" according to the record you want to do .. ..

And the manual is in Acrobat franais trs complete (I printed ...)

Because of the incompatibility ke I had, I put 8!

The drivers are stable and in addition to days set are arranged!
I use Cubase VST provided with (they could have a Cubase SX or The! But hey you can not have everything!).
I dscendu 2 ms latency and yes .... even when
Cel will be 6 months ke I use it and really I find it a trs ke good map, however I am not the only one to say ... TFPro amps are excellent, I use them mainly with microphones Samson CO2 Over-Head and I can say j'adorrrrre ke! And having a good console,
6 between the lines derrire can express themselves without problem ....
Here I have mainly used this card for recording drums on 8 tracks (for now) I would say koi in a month for the rest ... I do not think very deu!
I put him nine for the time ....

Here I come back to give me a little more objective! I spre because my opinion has not changed I find this card still good, I recorded the guitars through a POD 2.0 and my bass line and I find your exact trs ok ... I had more errors of beginners .... in both is normal! So by correcting the con ... ies is ten times better, no crashes ... the latency is still low 2 ms!

As I said six months is going to cel ke I use and I like everything, it is simple and intuitive ... prcis sound is warm and ... the sound is magic, and finally here I would return if necessary on this opinion a little later when the model is over ....

The report quality price of this card is absolutely excellent .... In any case, if I had the choice again I would do without hsiter ...

That said stay on 9 for now because I want to have a little more xprience Contents do to give the highest grade if it happens to be .....
See the source
Did you find this review helpful?yesno
Cookies help us improve performance, enhance user experience and deliver our services. By using our services, you agree to our use of cookies. Find out more.