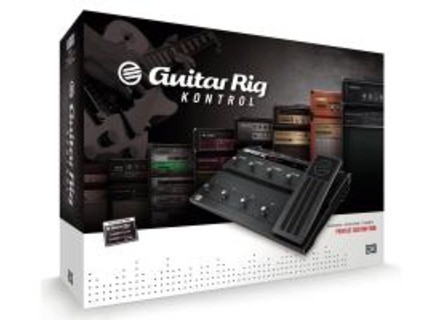 « The software is really all you need »
3

View other reviews for this product:
The Rig Kontrol is a hardware interface to be used with Guitar Rig software. It includes audio in/out as well as midi in/out. It connects with USB to a computer, and then can be used to control functions in Guitar Rig. In the software, you just have to right-click 'learn' and then step on the pedal that you want to control that function.
The pedal comes with 6 assignable foot switches. There is one 'variable' foot pedal (think wah-wah, or volume pedal). The variable pedal also has a switch that can be used to activate/deactivate the variable foot pedal. Therefore, relatively realistic experiences can be achieved for wah-wah effects in the Guitar Rig software if you combine the on/off switch with the variable foot pedal.
Rig Kontrol also has analog in and out connections if you don't have a different audio interface. The headphone jack will also be a convenient aspect to some users that just want to use Rig Kontrol with the stand-alone Guitar Rig software outside a DAW.

My opinion of the Kontrol hardware is largely based on the fact that two switches stopped working after about a year of ownership. This definitely made me feel like the unit was poorly made. I liked that the pedal was made of metal because a lot of other multi-effects pedals were made of plastic as that time (Line 6, Boss, Digitech, etc). However, the fact that the switches stopped functioning was a huge disappointment. Rather than pay the money to get them fixed, I mostly just stopped using them.

I purchased the Kontrol Edition of Guitar Rig 2 a long time ago. I used the hardware for a while in my studio. It was nice to switch on/off virtual stomp-boxes, control wah-wah effects, and select different presets. After playing with it for a while, there isn't a whole lot of utility of the hardware in the studio. I basically have used the hardware as a MIDI interface for the past few years, and nothing more. I have never liked the idea of using a computer for guitar effects when gigging. I prefer to use hardware (POD HD) with internal DSP so I don't have to worry about buffering by a CPU that causes delay. Guitar Rig is a great piece of software, but my opinion is that the hardware isn't all that necessary or reliable.
Did you find this review helpful?yesno
Cookies help us improve performance, enhance user experience and deliver our services. By using our services, you agree to our use of cookies. Find out more.