When you want to get creative with an audio processor, nothing beats a delay

A versatile delay plug-in is one of the most useful tools you can have in your audio-processing arsenal. It will not only enhance your tracks, but it can also contribute to the creative process by supplying rhythmic ideas. Just imagine how different the band U2 would sound if delay weren’t such an integral part of The Edge’s guitar sound.

Delays offer more than just simple echo. When delay times drop below 50ms, the human brain stops perceiving distinct repetitions and the effects of comb filtering kick in. When that happens, you can modulate delay time with an LFO for chorusing, flanging, and thickening effects. Increase the delay time slightly, and you get slapback. Increase it to more than 100ms and feed back the delayed signal to the input, and you get repeating echoes. The feedback setting determines the number of repeats, and hence, how quickly the repeated signal decays. The variety of effects you can summon with delay may surprise you. In addition to chorus, flanging, slapback and echo, most delay plug-ins are capable of impressive feats of filtering and the ability to create shimmery rhythmic grooves unattainable any other way.

When I compared the five plug-ins discussed here, I found their feature sets have a lot in common. In fact, the greatest difference between them is their user interfaces, which determine how you interact with them, which in turn influences what kinds of effects you create with them. All but one are multi-tap delays, which means you can set multiple delay times for the same signal. Some plug-ins have multiple taps that appear as separate delay lines connected in parallel or in series. All of them can sync to the tempo of your DAW tracks, all support tap tempo, and you can specify delay time as either seconds and milliseconds or a subdivision of the beat. In addition, all five run on both Mac and Windows and support most common plug-in formats.

Sigmund starts with four independent delays, each with individual overdrive, level and pan controls and its own resonant lowpass/bandpass/highpass filter. You can configure the delays in serial, in parallel or in any of seven combinations of serial and parallel routing. Apply two global modulators to affect the delay time, filter cutoff or amplitude of any of the four delays. Typically, the modulator is a multi-waveform LFO, but you can also choose an ADHSR envelope or an envelope follower controlled by the input signal’s amplitude. The output section has a limiter and VU meters to keep your levels under control. You’re able to lock individual delay lines and specific parameters when you change presets, and you can quickly scroll through presets in the browser using only your computer keyboard’s up and down arrows.

My description barely scratches the surface, but I found Sigmund to be extremely flexible. For maximum rhythmic complexity, I like to use all four delays synced to tempo with different beat subdivisions for the left and right sides of each delay. Considering the number, quality and variety of presets and parameters, Sigmund is a bargain you’d do well to consider.

Dry Piano: Here’s the original audio signal with no processing, a simple acoustic piano sound. Every example here starts with this clip.
00:0000:00

Complextro 1: This preset relies on two delays panned apart with a bit of overdrive. 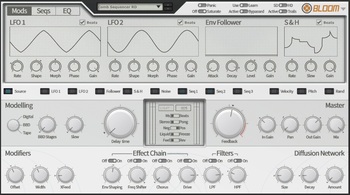 Rather than offering multiple taps like the other plug-ins discussed here, Bloom has a single delay line. Otherwise, it has similarly variable effects-processing capabilities and a user interface that makes it easy to learn and use quickly. Bloom supplies three models named for the type of hardware they emulate: Digital, BBD (bucket-brigade delay) and Tape. Each has one unique parameter; Digital lets you select the sampling bit rate, BBD lets you select the number of stages, and Tape lets you specify the virtual tape’s age. Alongside the usual controls for delay time and feedback, a Slew parameter determines how quickly delay time transitions from one value to another when you change it, making software sound more like hardware.

Bloom’s Diffusion Network is an algorithmic reverb you can reposition within the signal path. The Effect Chain supplies chorus, overdrive, envelope shaping and a fantastic frequency shifter that alters spectral content as it transposes repetitions as much as an octave up or down. You also get lowpass and highpass filters, two 3-band EQs and the ability to freeze or reverse the delayed signal. Bloom’s modulation automation capabilities are outstanding, with two LFOs, an envelope follower, sample & hold and three step sequencers you can use as a modulation source for practically any parameter. 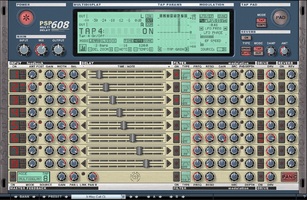 Though as versatile as any plug-in discussed here, PSP 608 Multi Delay’s standout feature is ease of use. Its GUI presents controls for eight independent taps in identical horizontal strips, which makes using it feel more like using eight rackmount delay devices than a single device with multiple taps. Each strip has a slider for delay time and knobs for other parameters, making it easy to set up complex delay patterns with a minimum of confusion. Each delay has a maximum 8-second delay time, as well as a state-variable filter, simulated tube-saturation overdrive and an algorithmic reverb effect with a choice of plate or spring types.

Dominating the upper section is a large LCD-type display with three sections for viewing and editing v`arious parameters. All taps share a common modulation section containing a 5-waveform LFO and an envelope follower that traces signals from the plug-in’s input, output, or individual taps. Knobs in each tap let you determine how much the modulating signal affects filter cutoff, and each filter can be a different type, if you like. In addition to lowpass, bandpass, and highpass, the resonant filters offer peak and four shelf-filter modes. Because the taps are stacked one atop another with horizontal sliders for delay time, visual feedback always makes the relationship between taps in a multi-tap setup perfectly clear.

SoundToys calls EchoBoy an “analog echo processor.” It isn’t, of course, because no computer software is analog. Nonetheless, it does a convincing job of emulating classic delay devices, both analog and digital. Even though its list of 31 Echo Styles namechecks specific devices—Space Echo, Memory Man, Echoplex and CE-1 Chorus, for example—it doesn’t actually model their specific circuitry. Instead, it duplicates their sonic character, functions and controls in a more general way.

The control panel layout varies depending on which of four modes are selected (Single Echo, Dual Echo, Rhythm Echo or Ping-Pong), and the Saturation parameter emulates the warmth of tape or tubes. Clicking on the Style Edit button reveals EQ, diffusion, wobble and saturation controls to customize existing and create original Echo Styles. Though expensive compared with similar plug-ins, EchoBoy is a favorite of many studio heavyweights and one of the most popular and versatile delay plug-ins you can own. 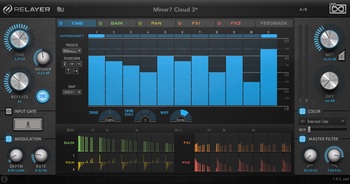 Relayer takes a different approach to setting up delay patterns. A knob labeled Repeats determines the number of taps (up to 32), and six tabbed graphical editors let you specify the delay time, gain, panning and two effects for individual taps, as well as the filtering and saturation applied to whichever tap you select for feedback by clicking and dragging on vertical bars representing values. Not only can you edit taps individually, but transform buttons and preset modulation shapes let you edit all taps simultaneously, too. Changes you make in the gain, pan and effects editors are reflected below in four real-time Visualizers. Effects processors include various filters, bit reduction and waveshaping. You can also apply degrees of swing and warp to delay times and modulate delay time with a simple LFO.

The whole process is more intuitive than it sounds and allows for tremendous flexibility and creativity. Although Relayer will handle all the usual duties of a delay processor, it excels when you want to dabble in experimental sound design. Of all the plug-ins discussed here, it gets the nod for giving you the ability to design twisted and bizarre presets.

Minor7 Cloud 3: This preset uses a combination of biquad and comb filtering along with 11 LFO-modulated delays.
Geary Yelton is Electronic Musician’s former senior editor. He's been writing for EM continually since 1985 and also writes for the U.S. magazine Keyboard. He authored two editions of The Rock Synthesizer Manual and served as staff synthesist for three major Atlanta recording studios. Currently, he's a freelance writer and consultant for the Bob Moog Foundation and lives in Asheville, North Carolina, and Nokomis, Florida.
Dernières réactions à cet article...
2

Log in
Become a member
Viewers of this article also read...
learning Multiply your creative processing with these multi-effects plug-ins
learning Modulation Effects - The Chorus Effect
learning Essential tools for your mix
learning Choosing your working tools
learning A/B Your Plug-Ins
learning These instruments and effects may not be well known, but they sure are powerful
learning Getting to know your mixing tools
learning Testing a plug-in
learning Andrew Scheps talks compression, plug-ins, panning, EQ and more
Voir tous les dossiers