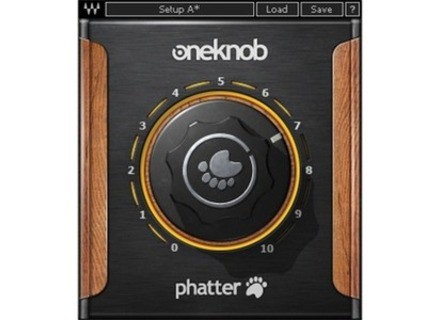 Buy this productView price information >
View other reviews for this product:
Waves has recently released a new products for those who need something very simple to use. The software is part of the OneKnob series, and just as the title says, these plugins only have one single knob to control the effect. In a way, these plugins are a bit gimmicky. However, they really do work quite nicely. The plugin is very simple to use. To increase the fatness of your mix, you simply add this to whatever bus you want fatter, turn the dial until you get the fatness you want and leave it be. It's that simple. The OneKnob Phatter is included in the OneKnob package series or the Mercury bundle. Both of these will get you the product, so it's not like you're just buying a single plugin. In one way, it can be a bit of a pain as the OneKnob package alone is around $300ish. Even though it includes seven of their plugins, I find it to be a bit of a ripoff. The Mercury bundle makes it a bit easier to swallow, but that thing costs a ton anyway, so you'd better be getting every single plugin that Waves offers.

I never found a ton of use for this plugin as I'm always battling bass in my DAW. There are times where I might use it on lead tracks, but aside from that, it's about as useful as the OneKnob Filter. If you're big into electronica, it'll probably be more useful for you.
Did you find this review helpful?yesno
Cookies help us improve performance, enhance user experience and deliver our services. By using our services, you agree to our use of cookies. Find out more.