Add this product to
Behringer V-Amp
1/ 24 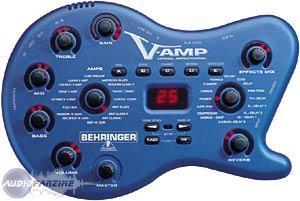 View other reviews for this product:
MGR/Robert

First i'll start with one thing,where's the power switch?it's a real pain in the ass to unplug this device everytime your done playing it.Then there's the drive power(where is it)distortion sounds like im playing through a $5 amp.I really hate the fact that its useless with 95 % of ams on the market.They have only one input and the ones with 2 are not equal.so the only way to bennifit from the two channels of your product is to use 2 amps like i do.

Construction and design are great,if they spent as much time on the sound and the other flaws as they did on the design concept they might have gotten some where.Also what did the do different on the v-amp 2 has all the same options as mine.

I use mine daily and found ways to compensate for it's flaws.I run my guitar to the v-amp then run the left output to a crate gx-65 and the right output to a peavey backstage plus and the headphone output to my pc for recording.I use the v-amp for vocal effects as well and its great for that.But if your on a budget this is for you but i wish i ciuld have gotten the line 6