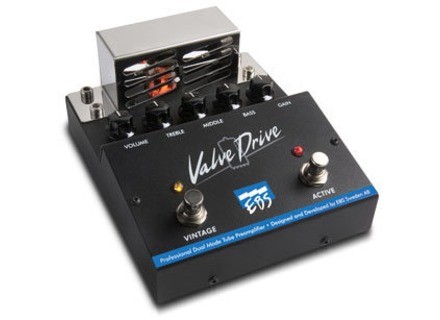 Buy this productView price information >
View other reviews for this product:
it's a preamp / distortion with a lamp with an input and output jacks and a DI output to plug directly into a PA system.

fiddled a bit and plug the case is resolved.

manual clear but I would say almost useless.

Then this amp is rather oriented jazz, funk and all that ....... I'm totally disagree ... I use it in training death metal ... yes yes I confirm!

I play a Warwick Corvette 5 string active with a Genz Benz Shuttle 3.0 on a Hartke XL 410 and a 210 Genz Benz plus a compression pedal Electro-Harmonix. This preamp already added me insane attack because of the distortion (adjustable) and the lamp gives a warmer sound and mediums mediums .. my god!! slap in the AC becomes downright monstrous pops potent drawn with a bit of distortion and the "envelope" that gives the lamp!

I use for almost two months.

I love the power it gives to its preamp.

I would do without hesitation that choice ... and as said metalheads will try!

Edit: Well I think I have more perspective and I must say that I totally underestimated this machine ... I use it now as a training death / grindcore and I'm not much at the limit of preamp ! amazing!

EDIT 2: Good rubber feet had to be reattached and it is being repaired for a problem of mass on the activation button ... nothing dramatic but for the price this is the kind of details that way!
See the source
Did you find this review helpful?yesno
Cookies help us improve performance, enhance user experience and deliver our services. By using our services, you agree to our use of cookies. Find out more.