Once the mastering series is finished and now that the mixing guide is (finally!) arriving the end, it's only natural that Audiofanzine asked me to extend this tale told backwards with a new series dedicated to recording.

But there's a difference though: this time your favorite site has listened to your feedback and we now include audio samples! But before we get to them, we first need to go through several installments to clarify and understand better the whys and hows.

For whom? What for ?

This guide is aimed mainly at the average computer musician. But I don't mean that in a derogative way, I only wish to put things straight right from the start to avoid any unnecessary complaints in the forums and favor constructive messages.

Okay, so what is an average computer musician? After having discussed it with the chief Editor at Audiofanzine, we arrived at the conclusion that an average computer musician is someone who wants to record his/her compositions without the ambition of becoming a professional sound engineer. This implies a lot of considerations that will help me as foundation throughout the entire series. 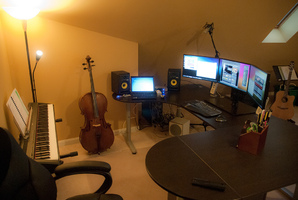 The first one is that the average computer musician doesn't have unlimited resources when it comes to recording gear. Hence, the techniques we'll see here are more on the budget side of things, so money shouldn't be an unsurmountable issue stopping anyone reading this series from achieving quality recordings.

On the other hand, there are some basic concepts that we can't simply ignore. Even if we'll go through certain things that some of you probably already know, it won't do any harm to review them again, even if briefly, in order to make sure that everybody can profit from the series based on a solid foundation.

But don't worry, we won't linger long except on some very specific issues. The goal here is not to make you a champion of theory but rather a proficient practitioner. Thus, we will focus on the know-how not on the know-it-all side of recording.

And throughout the entire series we will obviously keep a keen eye on the object of your desire: your music. While it is unreal to try to get the same quality as the best professional studios out there, the tools available today allow you to get results that won't make you blush. So sharing and even marketing your work is certainly foreseeable. In the end, that's the main goal of this and the preceding series: help you in your endeavors to create music, from conception to distribution.

To close this prologue, a brief word regarding how the series will be divided. There will be some purely technical and some purely theoretical articles. Some of them will deal with psychological (and even philosophical) aspects, while some others will deal with more down-to-earth aspects of specific instruments, like drums, guitar, bass, piano, saxophone, ukulele, violin, accordion, etc. However, unlike the other series, this one won't have a linear roll-out. Why, you ask? For two reasons basically: First, because the topic at hand lends itself to it. In fact, when it comes to recording, there are no rules regarding who should intervene first during the production process, since the tracking is done separately but provided there has been a serious pre-production work done previously – a very important topic we will be discussing in detail later on. In theory, it's better to start with the rhythmic instruments followed by the melodic elements. But in reality, the "modern producer" must be able to adapt to the circumstances without worrying too much about the theory. Incidentally, that's exactly my case right now since the different musicians who will be kindly giving me a hand throughout this series have all very complicated agendas.

Second, I think it will be much easier and pleasant to assimilate everything we will be addressing here if I alternate the different types of articles, rather than bore you to death with all the theory first, for instance.

And that's it for today. I hope you are as excited as I am to start this new adventure... See you next week!