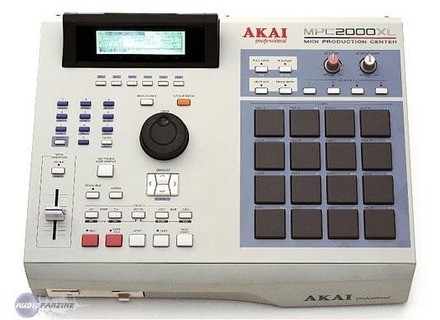 MPC2000XL, Sampling Sequencer from Akai Professional in the MPC series.

View other reviews for this product:
The MPC2000XL is similar to the MPC2000 but with many newer features; including four independent pad-bank keys, number of samples stored doubled to 256 on the XL, altering sounds to a different bit depth or sampling rate could be accomplished by resampling, time stretch was added along with other features. In 2004 the 2000XL-MCD version was released, which features a CompactFlash card reader as standard in place of the floppy drive or Zip drives used in earlier models. There were 4 limited edition 2000XL SE MPCs created between 2000 and 2003. There were two versions of the SE 1, one with an improved control surface, compatible with growing number of sound libraries and one with aesthetic changes. The Limited Edition SE 2 and SE 3 also had only aesthetic changes.

The sound isn't as gritty as say as MPC 60 or 3000, but it still gives it a nice analog sound. The pads are GREAT on this MPC and is one of my favorite pad models for the MPC's. IT comes with no preset sounds so I can't comment on that, but the filters and effects it has are sufficient enough to get someone started.

Overall it's a solid machine for someone who wants to step up from say the MPC 500 or 1000, but can't afford a 5000 or 4000. The price is reaosnable nowadays, you might find one on craigslist for anywhere between 300-600. I am glad I used this MPC because I churned out some great ideas with it.
Did you find this review helpful?yesno