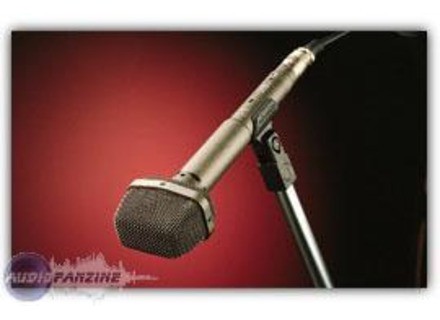 «  It is indestructible, this microphone! »
5

View other reviews for this product:
Here we have a good micro trs Stereo surround type X / Y has the particularity to operate either on battery or phantom power, giving it an unmatched versatility: c ' is recommended for use with food fantme when you can but that it can also be used on battery power allows it to be used on a recorder with microphone jack taken, for example (via adapter cable or ad hoc).

I bought it as a microphone for my coverage portable DAT recorder Tascam DA-P1, it has been for at least 15 years that I (we fvrier 2011) and it is indestructible, this microphone. I still use it with my current portable recorder to shoulder on SDHC Edirol R-44. Trs precision of sound reproduction Submitted, especially in the treble finesse and strength are waiting for you. Well, it is true, it lacks a little low. Sound quality level is more than a micro reporting, it allows to Gallant taking acoustic instruments, to musicians who play outdoors in the streets, for example. If you put this great micro (and art, it is just good place), it can do miraculous catch. It is even possible to put it in a system that cage Rycote windshield-made. Indeed, this makes a Socit Rycote for micro ^________________^

The microphone uses a 5 pin XLR Stereo symtrique standard (although not rpandu). It comes with a cable 1x XLR 5 pin female to 2x 3-pin XLR MLEs but tight deadlines to make Cables tailored to use it with jack (in this case , only works on battery). Example: I made a cable to 5 pin XLR female to 3.5 mm stromle expr so that I could also use it on my little portable tape recorder Sony WM-D6C ^____________ ^ And to use it on my other Marantz CP430 cassette recorder has input jack 6.3 mm, that I use the original cable with the addition of small adapters XLR Jack Female to 6.3 mle

Certainly it is more expensive than a micro electret (I had a microphone Stereo Sony camcorders ceului before it) but we gain in robustness and precision sound. And again, the era o I bought c'tait Stereo microphone with phantom power the cheapest at the time. Well, there are certainly other trs This category microphones that have been around but still, I do not really regret this purchase ^_________^

Other dclinaisons of this model:
- ATM Audiotechnica 822: Same, but only works on batteries.

Is a clone of this model: the Superlux E523D.

Windscreen as "hair" as Audiotechnica do not manufacture for Submitted MODEL, I use it for a Rode Dead Kitten, Designed for the original Rode NT4 and it works very s good.
See the source
Did you find this review helpful?yesno
Cookies help us improve performance, enhance user experience and deliver our services. By using our services, you agree to our use of cookies. Find out more.