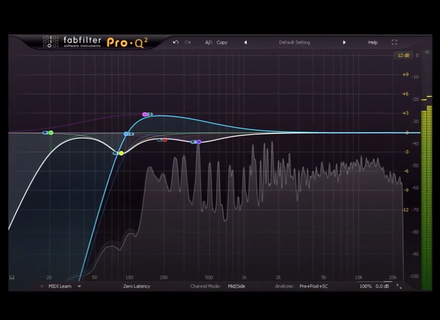 Being a user of version 1 for some time, I did not need help to learn how to built to use it. Regarding the installation, as usual, the installer takes care of everything. Good point: it only installs the plugin, and not two or three other files scattered around the library.
However, I do not put any notes on this part, because installing a plugin effect alone is always easy.

On a powerful computer, I have noticed no problems with too resource-intensive or stability. However, I&#39;ve only tested this plugin; I have not really used in a project. So there may be bugs, instabilities or performance issues, including laptops, without that I either realized or absence of note on this section.

I had barely tested the Pro Q2 for a quarter of an hour and I already I was very disappointed with this plugin. I finished my test, I am forced to use the features and see what it looked like, but I quickly learned that I would not keep.

In my opinion there are only two really interesting news. The first is the little piano that can replace the frequencies below the plugin: it can be useful, although we did not really need. The second is rather a lack filled over the V1: the "new" slopes of Low Pass and High Pass (18 and 36 dB / oct notemment). I say "missing" because these slopes were already available in Logic, in the Channel EQ for at least 4 years, and probably more!

Regarding the interface, it has been modified, but not in a good way: FabFilter has too stretched vertically. I would have preferred something between the Channel EQ in Logic and version 1 With an interface like this, it seems to draw the most high and low points, yet we do takes a few dB. .. In addition, the interface still does not integrate with Logic. I know the stories of colors it&#39;s not the most important, but I think FabFilter could make an effort on it.
The disappearance of the toolbar annoys me: the interface is not the same all the time, and some buttons move along with the bands. Another deficiency related to the toolbar: Once again, the Channel EQ is best done because it lists the parameters of the different bands (all bands), which makes it easy to copy an EQ from one project to another not spend time backing up unnecessary presets. It is also useful when multiple computers are used. I know the Pro Q has more bands than the Channel EQ and list 24 sets of parameters is not possible in a plugin window, but with a multi-line system or a scroll (there are in other FabFilter plugins! ), it can be done. And besides, with the plugin in full screen, there should be room, right ??
Another disappointment: fullscreen does not even use the OS X! Just a reminder, because it&#39;s true that everyone does not know: it full screen mode was introduced with Mac OS X Lion in 2011! Result: the touch gestures and keyboard shortcuts do not work, to go from EQ to the mixer or arrangement, for example. Bravo for innovation at this level, this feature is officially a waste of time.

The Spectrum Grab (which in theory create a band pulling the spectrum as it were) is totally unnecessary. I found myself using my eyes to see if I took a peak in the spectrum well (visually), instead of listening to hear the reduction of a resonant frequency ... In addition, this is the kind of news function rotting life. When we want to use it, we can not access it, and when you do not want it active.

As I said above, I do not force me to use the Q2 Pro for an entire project, I just did a test to see the new features and see if I actually served. Among the new features, I have not specifically tested some, such as the Natural Step method, which probably uses the principle of Linear Phase EQ Logic. Another example: the slopes of steep filters (96 dB / oct) can be effectively used, etc ...


Balance the races: I keep my version 1 of this EQ. The functions provided by the new is not interesting enough for me, and the negatives of version 1 have not been corrected. I think this new version is just made for the effect of "wow!" When you see the thing without using it, it seems that there are useful features, but for the use it is used exactly like the first version and the new is unknown. I keep my "old" EQ.
This review is of course based on my personal use. Although I am reluctant to believe, some people probably find this very handy new release. I invite those who plan to buy this EQ test and judge for themselves. But I&#39;m still of the opinion that for users of version 1, the update (especially for the price) is not worth it. But again, you be the judge.
To summarize, the Q Pro Version 2 is still a good EQ, but it&#39;s not thanks to its innovations. If the version 1 was still available, it would be just as interesting. I criticize so this plugin for its lack of new products, not because I think it is a bad plugin.
See the source
Did you find this review helpful?yesno
Cookies help us improve performance, enhance user experience and deliver our services. By using our services, you agree to our use of cookies. Find out more.