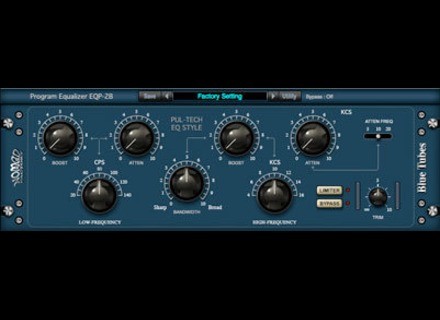 The Nomad Factory Program Equalizer PEQ-2B is an equalizer plug-in that's a part of the Blue Tubes Equalizer Pack. This is a Pultec style EQ and is actually labeled as the EQP-2B on the face of the plug-in, so I'm not sure why there's a difference there. Either way, the plug-in has an easy to use interface that should be simple regardless of if you're familiar with the general Pultec EQ make up. It's not identical in terms of make up to the original Pultec, but it's about as close as you can get. There are two bands, a low frequency one with seven fixed frequencies to choose from ranging from 20 Hz to 140 Hz and another with frequencies ranging from 4 kHz to 16 kHz. Each has it's own separate boost and attenuation knobs, and there's also a bandwidth parameter for the high frequency band. You can also set the attenuation frequency on the high band with a three way switch with frequencies of 5 kHz, 10 kHz, and 20 kHz to choose from. Lastly, there's a limiter button for light limiting and an overall output trim knob. A manual isn't something that most users will need, but if you're feeling lost you might as well have it around to help with this and the other plug-ins in the bundle.

I don't own Nomad Factory's Blue Tubes Equalizer Pack but have been using the Program Equalizer PEQ-2B on a few different systems at the studio where I work. The main room we have it in consists of Pro Tools HD and a Mac Pro computer that has 10 GB of RAM and dual 2.66 Ghz Intel Xeon processors. I've never encountered any issues at all when it comes to performance, though this system isn't the best judge since it can handle virtually anything...

While useful, I haven't found myself using the Nomad Factory Program Equalizer PEQ-2B too much after initially using it a number of times for simple EQ jobs. It's best for bringing out a certain character in a sound rather than for finer EQ purposes, but I've got other EQ's that I think do the job better than this one. It will definitely do an okay job for use here and there, but I've found that it's not good enough to be used on a daily basis. There's nothing necessarily wrong with it, it just doesn't sound amazing. I've got other Pultec style plug-ins, including some others made by Nomad themselves that I like better than this one. It's definitely nice to have if you have the plug-in bundle it comes in, but the bundle isn't worth it for this plug-in nor do I think it's worth it to purchase it individually if possible...
Did you find this review helpful?yesno