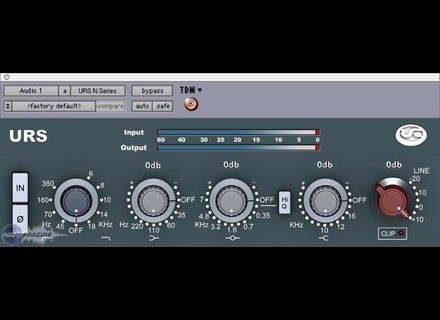 The URS N Series equalizer is a plug-in that is modeled after a Neve 1084 channel strip EQ. The picture above is the older version of the plug-in, which looks like a real Neve, but the newer one that I have doesn't share the same interface look. Either way, the plug-in has the same parameter make up - perhaps they lost the right to use the Neve look. I didn't encounter any issues at all while installing the plug-in, which will also include the N Series Mix plug-in which is the same but with more bands. The configuration of the N Series EQ is the same as a Neve EQ, consisting of three bands and a high and low pass filter. The only difference is that the real Neve 1084 just has the high filter and no high pass. Each of the three middle main bands has parameters for gain and for frequency, where it gives you a few different frequencies to choose from on each band, sharing the same frequency selection as the Neve. I haven't had a need to check out the manual for this plug-in so I can't say how it's configured.

Running the URS N Series plug-in hasn't been difficult for me to do at all on my home system. I've also ran the plug-in on a Pro Tools HD system, but at home I've got it in Pro Tools LE 8 running on a Mac Book Pro with a 2.2 Ghz Intel Core 2 Duo processor and 4 GB of RAM. I run Pro Tools LE with a Digi 002R audio interface or a Digidesign Micro Box if I'm on the move. No matter what the system, I've never had any performance problem with this plug-in and it's definitely worth noting that I've had many instances of the plug-in going at a time.

The URS N Series is one of my favorite equalizer plug-ins out there, although I do miss the days when it looked just like a Neve. I guess I like the plug-in a lot since I'm used to using Neve equalizers, as it's very familiar to me especially considering the frequency selection. Of course it doesn't sound too much like a real Neve 1084 EQ, but it sounds pretty good nonetheless. As far as Neve based software EQ's go, these are the best I've seen...
Did you find this review helpful?yesno
Cookies help us improve performance, enhance user experience and deliver our services. By using our services, you agree to our use of cookies. Find out more.