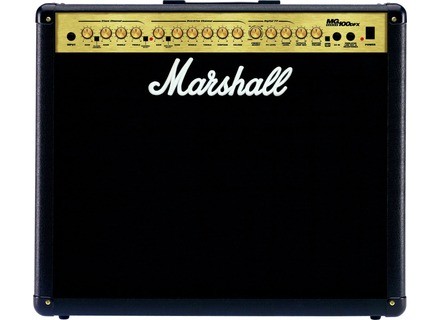 Product replaced by the Marshall MG101CFX.

« Stain a reputation for Dummies! »
2

View other reviews for this product:
The mark in black and gold does not really need to be made, but unfortunately, one wonders why the heiress of Jim Marshall has authorized that puts the logo on this thing.
So this is a transistor amp with a power of 100W.
2 available channels: clean and overdrive on each it is possible to switch respectively crunch or more drive. It has a three-band EQ and a gain knob on each channel, and (bonus) a contour knob on the drive channel for a more compressed sound (left) and more open (right recess) .
There also has various built-in effects that can be selected via a conventional knob that adjusts at the same time the power of the effect (the light chorus sound cascade flanger for example). In order, we chorus / delay, delay alone, one chorus, and flanger. Following what was a knob adjusting the volume of the effect with respect to the overall sound. Finally, a single knob for adjusting reverb. Last two knobs adjust the tone effects, and master volume. A small switch allows the simulation of all the lamps (we&#39;ll talk), and finally, two jack inputs allow you to use the amp as a single speaker (in CD) or use other speakers (even headphones ).
At the rear, an entry for the footswitch and effects loop and another switch that I never touched but that seems slightly boost or attenuate the sound of the pedals in the loop.
A comprehensive amp level settings, you almost forget about the strength of the product, a real rock! And gold brushed look add ... if only we could stop there ...

Well as comprehensive general configuration, is fairly simple to use if you have already had to deal with an amp and, otherwise, we quickly understand the effects of knobs and switches on the sound. Not really need a manual, but it can put words to sound change. Practice.
Although a 100W amp, the power output is not unique when it was known lamps and there is no risk of "real" surprises with the volume above 5/10. The comprehensive features are still a big advantage compared to some competitors.

The problem is that a receiver must still get a sound at the end (it&#39;s not a decorative object ^ ^)
All my idols are placed on Vox and / or Marshall but I have great difficulty understanding how anyone could spend JTM 45 to this "thing"!
We begin with the clear sound which is pretty good compared to others available. A fairly neutral sound and a little chubby without much noticeable loss of definition. We can add a slight chorus and / or delay, I&#39;m sure he is a good model to start jazz, country, pop ... any style of music that requires a clear sound.
For more ... saturated sounds (exactly 3: crunch, OD1 and OD2 gain more in reserve). The crunch and OD1, if not pushed too can possibly be deceived at first. But if you push too much gain (any saturation) is despicable! True sound diarrhea! What&#39;s coat of arms Marshall try for years and perfectly unusable with single coil pickups as doubles. It&#39;s pretty cold even, but the switch simulation lamps to adjust part of the problem, without improving the sound (Christian charity I will not dwell more on the subject. This is a bad c That&#39;s it ^ ^)
The effects themselves are not bad, especially the chorus. In contrast, the small number of settings makes use of delay rather limited.
You understand that the marshall MG100DFX does not honor his legacy.

I used several years in music school in the area without having to own, so I can evaluate it fairly thoroughly. I have used other amps in the same school as a Fender Frontman 15G, not bad for practice and a Mesa Boogie Mark IV (which I always found no ch * er despite its price and " reputation ").
The MG series is in no way a Marshall but more a parody: they believe that the karma Marshall was a fat and mushy sound with the highest possible gain without compromise, unfortunately for them it is not. On the other hand I like the clear sound that can be heard in the group without exceeding in brightness as other brands.
On the other hand, the very low price (and a fortiori in hand) often attracts beginners who want to quickly start a band, but I beg you, look elsewhere ^ ^
For example, I managed to make it sound a Rickenbacker 330 to 1500 € like an old Epiphone LP100 ...
With the experience I brancherais my live guitar on the mixer xD
See the source
Did you find this review helpful?yesno
Cookies help us improve performance, enhance user experience and deliver our services. By using our services, you agree to our use of cookies. Find out more.