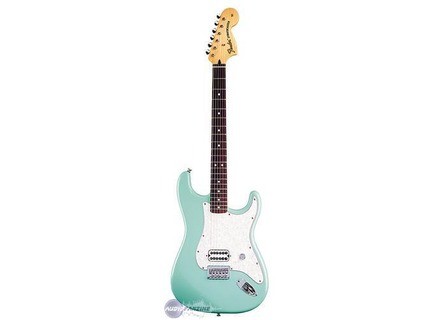 View other reviews for this product:
I played this guitar in Sam Ash on Sunset Blvd., Hollywood, sometime last year. I think it was selling for $500.

In a word, nothing.

I don't like Blink-182's music to begin with, but that didn't necessarily have to mean the guitar was no good. Unfortunately, I think both Fender and Tom DeLonge had pulled a fast one on Blink-182 and punk fans with this one. In buying this guitar, you will basically be getting a Squier Bullet, a single-humbucker guitar devoid of tonal variety (no trem, no neck pickup, no tone controls)...costing four times as much as it should. The pickup on this is supposed to be customized (Seymour Duncan Invader, I believe), but you can buy this pickup for $80, so how in the world could this guitar cost $500?

The bluesier lead styles and chiming rhythms I usually play were entirely impossible to get out of this guitar, so I tried to play out of character to see how this thing fares as a punk rhythm instrument. It sounded okay, but still doesn't hold a candle to the power of the sound from my GIbson Flying V '67.


I honestly do not feel any difference between the neck and body of this guitar than that of my old Squier Stratocaster. Where exactly is the $500 going?

Perhaps there's a reason why this guitar was discontinued so quickly. Now DeLonge has somehow conned Gibson into giving him a signature model -- based on an ES-335, of all things. I haven't played this model yet, but just for being one of the ugliest guitars I've ever seen, you won't catch me within earshot of one. As for this signature Strat, once again I ask -- a hunk of wood, a single humbucker, one volume control. Sounds like you're paying $200 for the workmanship and actual materials, and $300 for the name. Truly one of the biggest ripoffs in signature instruments.