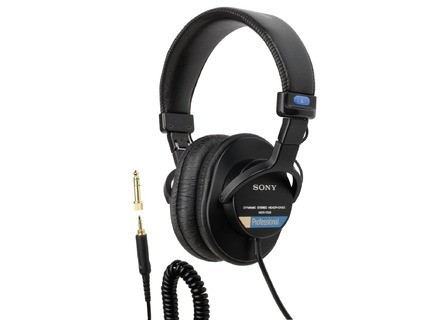 MDR-7506, Studio headphone from Sony in the MDR series.

All user reviews for the Sony MDR-7506

damballah's review (This content has been automatically translated from French)" Revealing"

This headphone is a developer of impurities and imbalances.
I used plug and premix

Strong yes, but the earbuds will crumble to the ears of those who donned .. not top ...

Elias :)'s review (This content has been automatically translated from French)" A reference"

Sony MDR-7506
4
A very good versatile headphone. Although for decision, good for mixing.
The spectrum is wide, there is serious. Treble, meduim are well defined.
It is lightweight and comfortable to wear. Strength level, nothing to report.
This is an excellent price / quality ratio. I've seen a lot in many major studios in the capital.
With the experience I remake this choice without hesitation.
I also have a 750 ULTRASONE which is even better for the mix but more expensive.

Global Cf.Avis
Buy at Sweetwater
Did you find this review helpful?yesno

Sony MDR-7506
3
Use for years. First personal headphone "pro".
+ Storage bag provided
+ Folding
- Sustainability
- Auditory fatigue
I recommend other headphones & more efficient solids Beyerdynamic DT style.
With the experience that I did not when I purchased, I do not have that choice ...
But now I'm working on my flux capacitor, I progressing well but it is not yet developed.
More seriously, we often learn more from our mistakes than his victories.

Studio use, sound, exercise instruments ...
Its coatings are nice, at least not as it finally: they stick around the ear. This is due to the material (plastic). Mind you, after a while, they crumble and suddenly the problem with it ......
All music.
And yes, the atria keep warm.

Well, it is not so strong. The headset folds on itself for transport or storage (in a pouch provided, that is). But the cables going to the atria tend to get stuck between the so-called atria and arches that surround them.
Non-detachable connection.
And yes, his appearance has deteriorated ... Grave! As already mentioned, the atria effitent (it makes me hungry to force write the word "is effitent")

For sound, not ç'est wrong. A bit tiring & aggressive use compared with Beyerdynamic DT 250, for example.
Good insulation.

Jamian's review (This content has been automatically translated from French)" Nickel!"

Sony MDR-7506
5
I use it for several years (4 or 5) now. I passed by several other headphones not very expensive before, but for a (good) hundred Euros, it is just nickel. A very good sound quality, which does not seem to be too tarnished with time, and very comfortable (compared to my old headphone, Behringer HPS5000, but it was anything but comfortable to wear. ..)
I tried some Sennheiser worth double the price of these headphones, which sounded so good.
Only downside, mosses eventually crumble, and I will have to change. It leaves black spots around the ears

PierreGP's review (This content has been automatically translated from French)

This is a headphone precise, compact, fairly well insulated and ergonomic.

Unfortunately, the "bottom" is under-represented and the general report is garish.

It is well for monitoring the musician making and suitable for the editing and "stalking", even at low volume.

Its characteristics make it sound is not suitable for rough mix even troubleshooting or ok for listening pleasure.

I found it ages poorly, bearings disassociate themselves headset and coating disintegrates gradually.

As a general principal headset, you can find more versatile, and comfortable mat for a bit more expensive.

Sony MDR-7506
4
I record acoustic (chorus, strings) and I was looking for a headphone suitable for a mobile configuration.

The first listening are disappointing. The 7506 was clearly not a linear response with a nice bump around 10kHz. The bass is present and the medium firm but too much behind. Listen to music on this thing is frankly not pleasant.

In taking its position, defects 7506 make it a formidable tool to track the breath. Brightness in the acute is an asset to detect misplacement of microphones, wind, hissing, noise and all are very well highlighted.

In addition, the headphones are lightweight, comfortable to wear and well insulated, an indispensable feature live.

Finally, the 7506 is compact when folded, really does not take place. And it supports quite well the abuse. In short, an ideal partner when mobility account.

Finally, yet with a nice and its not really fair, this headphone is a great tool for the soundman nomad. I care.

Sony MDR-7506
4
3 to 4 months, headphone quite right, returns to musicians or singers. Standard in most
Studios, Lots appreciated, but nothing more.

Sony MDR-7506
4
March 4 months, everything is okay headphones for musicians and singers returns. Standard in most
Studios, apprci by alot, but no more.
Buy at Sweetwater
Did you find this review helpful?yesno

Sony MDR-7506
5
2 months that I use, I have tried many other model whose Sennheiser HD25 II, the monster, bose ...
What I like most is that it accounts for all frequencies. The value for money is good.
With the experience that would do this choice.

xbassman_K's review (This content has been automatically translated from French)" A reference!"

Sony MDR-7506
4
Almost 10 years of good and loyal service in my studio, and always in good shape except the atria that are beginning to acknowledge the blow, but hey, like any good professional studio headphones that respect, I am possibility of change. Otherwise the build quality one would expect from such a product is by appointment. It is foldable, comes with a soft case and an adapter mini-jack/jack 6.35.
I used a lot of conventional headphones can usually be found in the studio: AKG, Sennheiser, Beyer Dynamic, Sony, Shure Audio Technica and other (rare these last two), each with their specific features (taken or monitoring), but if it comes to the monitoring accurately (I did not say the mix, it is said often enough, mix in the headphones is heresy, and even unconsciousness. Unless you want to become deaf before the hour), then the Sony MDR7506 IMHO wins the prize. Its qualities make it an analytical tool that over time becomes essential. It does not flatter, it reproduces what is recorded and that's all we ask him! Said like that, it sounds simple, but ultimately it is not so common as that. Be careful with the volume of use as it is able to send a very strong and listening can be considered "hard", it occasioned a tired relatively limited. In this regard, I could test the (more expensive) big brother in the band, MDR7509, and I would say it is certainly less tiring, less analytical, but also more high-flying HiFi in fact. In direct comparison is obvious, one of you makes it all beautiful (the 7509) while the other points to you the details, the errors (7506), what a tool!
Defects at the menus I could find him:
- A concern that I meet with the vast majority of headphones in terms of physical comfort, after a while, a rather unpleasant pressure is felt in the cartilage of my ears causing an inconvenience to some but not prohibitive, and this chapter 7506 is far from being the worst for me.
- The cable is not removable, although it has never been a problem, it's nice to know that you can easily change it without sending it for repairs.
In short. For me and the use I make, the price / quality ratio is excellent, especially after having tried the cars, I still have not found its equivalent anywhere else! So yes, I would do this choice, if indeed it is still in the catalog, which seems to be the case. Too bad. It only remains to hope that the new range is of the same ilk.