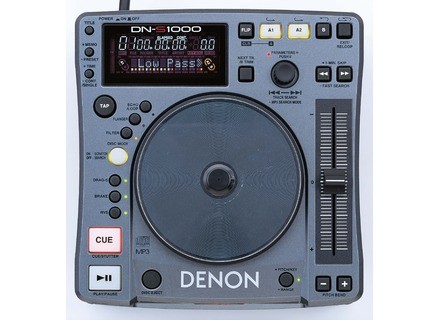 All user reviews for the Denon DJ DN-S1000

DjVOxS's review (This content has been automatically translated from French)

What is your opinion about the value for the price?
<span style="white-space: pre;"> </span> I find it exceptional. I think that compared to the pioneers there is a lag. the 1000 is equivalent to the cdj 400

Knowing what you know now, would you make the same choice?
<span style="white-space: pre;"> </span> I learned to mixed with the Denon I think it is a material quality to recommend it!</strong>
Did you find this review helpful?yesno

projectsoftx6's review (This content has been automatically translated from French)

Notice a little further use for nearly a year ...
Denon vs. Pioneer, always the same fight: Pio Denon for its simplicity and for its multiple functions ... Sorry for the quality / price ratio is definitely Denon!
Following is a question of taste! Mixing electro / house, it is sometimes interesting to have an impact.
Damage to the effect that there is a loop loss dB (volume)
Scratchouiller with the machine is possible but I mean scratchouiller! because the plateau is too small ...
Now I'm gonna quibble with minor flaws I found: Can not play with both start Hots and effect parameters, qques latency for certain things (cahrgements Memo, research Cue and loop point), but nothing major. Forward or backward with the plate is rather special (does not return immediately to normal speed) and sensitive enough. The key pitch is a delight
The maximum accuracy of pitch is 0.1% which is felt for long (I mean long!) Transitions where a shift with time (after about a minute I was thinking)
I do have dictated that its lightweight small defects, know it is terrible and complete, it responds well.
But my level of mix has evolved to where a future transition to DN-S 3500!
Wonderful to start and develop properly, it has everything a great!
Did you find this review helpful?yesno

dj chak's review (This content has been automatically translated from French)

Denon DJ DN-S1000
5
1: I use it since ending for 1 year
2: +: the effect (echo / loop and flanger) function prcis TAP but not enough for my taste, the bpm (exactly 90%) the size of the plates, the search for MP3 playback but MP3 files is not enough dvelopper for my taste. slot-in loading: P
the -: effects useless (almost) like the drag-s, not enough precision in gnral for MP3 files, after some months one of them (while silent new) has started a "bugger" at the snap disc when the disc he released j'jecte but the engine continued to turn to eject him out s'arrte and then starts to turn the other way then it's pretty s'arrte gnan in evening.
qualitprix the report is good and trs rare on this type of product (300 euro on new SONOVENT)
Did you find this review helpful?yesno

NuitsBlanches.pro's review (This content has been automatically translated from French)

It's been a month since I bought two turntables used.

Minimum: pitch can be enough prcis, the BPM counter, the impossibility to combine their effects.

JBSYSTEMS player of the 2000s who has lived.

Chesley doubles players so and so.

Outstanding! DO NOT HESITATE! I found two Denon DNS 1000 350 the pair. the price of my gemini cdm3600 nine. L must not hesitate! DENON even when it is serious.

I regret not having bought before !!!!!! Yes yes and yes!
Did you find this review helpful?yesno

mich001's review (This content has been automatically translated from French)

- What is so special that you like most and least?
-Plus: They are small in size so easy to carry!
The effects that are very easy to use!
Denon is a very good and reliable brand!

- The least: With MP3, you can not always be able to fast forward or rewind!

- Have you tried many other models before buying it?
I had Pioneer CDJ-100S.

- How would you rate the quality / price?
For me and it is only my opinion, they are much better than the Pioneer and cheaper!
Quality / price excellent!
- With experience, you do again this choice?
Yes I will stay in this brand but I will take perhaps the DN-S3500!
Did you find this review helpful?yesno

dj-tangas's review (This content has been automatically translated from French)

Denon DJ DN-S1000
4
Here now a year that I mix with denon dns 1000, as overall balance what I find really good and quite easy to operate but holds contrary to what some people may say.

The advantage: the size, look, the buttons are nice, the effects are clean and Numérik loops that can not be perfect, thanks to B-trim function.

As disadvantages: Personally I find the BPM counter not accurate at all, and a caller low I do have are not very practical in contrast to the pioneer.
(Caller to hold the ear)

Otherwise I find these decks rather nice, I see me taking the same dns-1200

sail: d
Did you find this review helpful?yesno

djguillaume14's review (This content has been automatically translated from French)

Denon DJ DN-S1000
4
I used the last 3 years, compact and quite complete it is very practical with two loops, the price is attractive
Did you find this review helpful?yesno

Djwouhai's review (This content has been automatically translated from French)

What is so special that you like most and least?

I like:
- The effects for the flanger and echo loop after the other I do not use it too.
- The format of the machine it takes no room.
- Ability to change the point B for the loop.
I like least:
- The tempo is the trunk from time to time the shot is boring for the echo loop.
- It would be nice to be able to change the point A when you do a loop on the fly.
- When you turn with mp3 there are 2 3 functions that work half the time ...

How would you rate the quality / price?
Excellent nothing more to say!

Obviously they are on top! A comparison in the same price range with the CDJ100, it is still there despite the years but it lacks the main feature and mp3 from the Axis 9 I find it unresponsive at the plate, no 'echo loop as the Denon which makes the operation super simple but the effects of a 2 3 more than the Denon, which are not bad.
Did you find this review helpful?yesno

djolivier20's review (This content has been automatically translated from French)

Denon DJ DN-S1000
5
I use it since 2006, I would say that these digital effects are well done overall, general good little CD player with touch function with multitude of vinyl in + issue price is very affordable ... to do with time but not that of oàublier DENON ...
Did you find this review helpful?yesno

phar0n's review (This content has been automatically translated from French)

I like these plates. Most of the functions and effects (which are numerous for a trs drive this price range) are well developed. These are not gadgets as one might think.
For cons, the scratch is completely useless. It must be a virtuoso to do something similar vinyls, as given that there is no visual repre, the jog wheel is the Diameter of a cd and if it goes too far too fast, the music takes a little dlais back, or just stops.
Also, another sad problem, and co is the filter frequency drives, which significantly reduce the volume. When they are used, one should always have a hand over the mixer, directly on the volume or the gain of the channel, you have the long complex mix.

There is no cooling Systm ... I have also caused serious problem during a live set. I do not BLME machine taient extreme conditions: heat burst, I had left in the HIAL transport, and I had forgotten to dye my APRS decks test its ...
They therefore operate for 6-7 hours under attroces, and during the mix, one of them began to malfunction.
She survcu, but now I try to always have on my player to be able to alternate the background music before I set my prchauffer without turntables.

Numark CDmix III.
I do not m'achernerai this MODEL is incomparable and not in the same price range.

Since I have, I tried a few minutes the Pioneer CDJ-200 and I must admit that if we isolate only the decks, I like the DN-S1000 mieu. For the same price, denon offered me a lot more features. on the other hand, if we compare all-mixer decks, sometimes I be jealous of Systm pioneer who privilgi effects directly on the mixer instead of on the turntables.

Excellent is the plate most complte quality in this price range.

If I had the budjet, like any DJ census of this world, I would choose the CDJ-1000's the pioneer. With a good mix of the same quality of DJing these kits are by far the most powerful and those leaving the crativit more room on the market. on the other hand, with the same budget that I possde now, yes, I would do this choice.
Did you find this review helpful?yesno
Cookies help us improve performance, enhance user experience and deliver our services. By using our services, you agree to our use of cookies. Find out more.