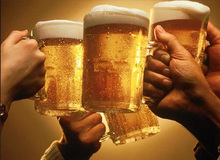 - Nobody can read your band's name on the album cover
- The name of your band is taken from a dermatology handbook
- You can't shower without hair conditioner
- You took Swedish as a second language
- The drummer's kit takes up half the stage
- The guitar is tuned lower than the bass
- It doesn't matter if the bassist doesn't show up for rehearsal
- The clean sound of the guitar is for intros
- Your drummer plays as much with his feet as he does with his hands
- Your songs are about war, knights or death...
- or, even better, about knights killed at war

- The guitarist is forced to use a wall of cabs to hide his POD
- Your songs are used as background music for snowboard or motorcycle videos
- Your instrument is black, like your clothes
- You only recently learned that that there are other colors besides black
- You have used church bells in the intro of at least one song
- You have a studded bracelet
- You only see pinkies and index fingers in the front rows during concerts
- You have more jewelry than your girlfriend
- You always have crossed arms and look like a lunatic in all photos
- You have a tattoo in Elfish
- You prefer to write lyrics in Latin rather than English
- You can tune to your tinnitus
- Your band is the only one in its sub-genre
- Your guitar has more than 6 strings
- You can't stop counting in your head whenever you listen to a song
- You think all other metal genres aren't really metal
- Your singer is the only one who can understand the lyrics...
- which always makes you wonder whether he actually writes any lyrics
- The monitors onstage are covered with dandruff from too much headbanging
- The strap of your guitar is so long that you are forced to spread your legs to play chords
- Everybody calls you Astaroth, even though your actual first name is Chris
- You have beer for breakfast
- You hang a pentagram on top of the Christmas tree
- Your phone number starts with 666
- Your license plate includes 666 somewhere
- Your cat's name is Morgoth
- You think Metallica was better before