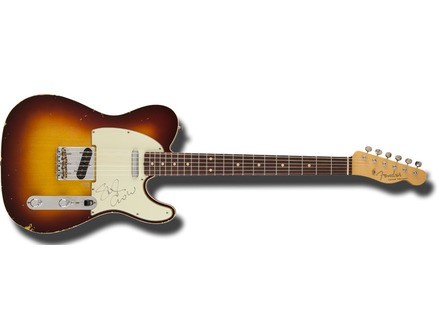 Here is what Fender has to say about that guitar's story:

"In 1994, Crow was readying to embark on her first tour as a solo artist when most of her band’s equipment–including her own Custom Telecaster–was stolen. The band quickly acquired new gear, and Crow’s backup guitar became her main instrument.

Shortly thereafter, the band performed at the Backyard in Austin, Texas, and a fan who had read about the band’s stolen gear approached Crow with a slightly used 1959 Fender Custom Telecaster suggesting it was a suitable replacement for her stolen guitar.

The guitar belonged to the fan’s mom who lost her battle with breast cancer. Touched, Crow accepted the instrument and continues to hold it very near and dear to her heart."

The instrument was brought to the Fender Custom Shop in 2011 and was recreated. The original 1959 Custom Tele was stored, and Crow has used the replica since.

The model includes a limited edition case, a certificate of authenticity, Sheryl Crow concert memorabilia and a certificate depicting the story signed by Sheryl.