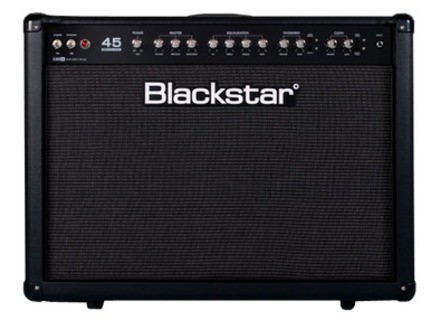 Series One 45, Tube Combo Guitar Amp from Blackstar Amplification in the Series One series.

View other reviews for this product:
I originally bought the Blackstar Amp Series as a backup amp for my Peavey Classic 30 (EL34 tube amp). I tried a Fender Mustang III (same price), but wasn't as impressed - especially with the cleaner sounds. It also has only 2-button or 4-button footswitches. I didn't want to buy a 60 lb tube amp.


This is pretty easy to lug around at only 36 lbs - lighter than my Peavey. I've had the Blackstar for about two weeks now and am just getting to the point where I love it. It takes some tweaking of the presets to find "your" sounds. I've used it on about 4 gigs so far. The first gig, I just used it in manual mode with my regular pedalboard and it worked OK - no problems, and I actually got some nice compliments on the tone.

Then I started using it with the FBV Express and it was even better, but I was using two pedalboards, so I upgraded the FBV Mk II Express to the Shortboard. Now, I'm really impressed. I no longer need my other pedalboard (which cost $300) and the FBV Shortboard doesn't require A/C or batteries. BTW, this amp has some balls - louder than you'd think based on it's size. It's also "upgradable", as I downloaded new firmware which gave me about 4 or 5 additional kinds of reverbs and who knows what else.

My only complaint is that the master volume control seems to have 80% of the gain between 8 and 10 o'clock on the control. Not much gain is available after the 10 o'clock position. It should be more linear. This amp will replace a pedalboard AND an amp for $500 ($300 for the amp + $200 for the Shortboard). So far, I'm in no hurry to get my Blackstar amp back - I'm getting spoiled. It's a really versatile amp.
Did you find this review helpful?yesno
Cookies help us improve performance, enhance user experience and deliver our services. By using our services, you agree to our use of cookies. Find out more.