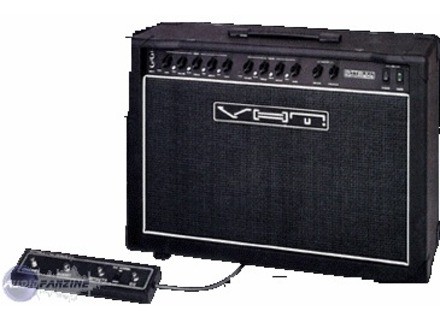 View other reviews for this product:
VHT 50/12.. 50 Class A/AB watt tube combo, Graphic e.q. (bypassable),3 band e.q., Series/parallel effects loop,4 button footswitch.. ready for the stage. 2 channels.. clean and lead. Lots of gain available here. EL34 tubes, 3 12ax7's.. Boost,Edge and Bright switches (for BOTH channels)... literally a TON of tone shaping options and interface. This is a very professional,versatile piece of gear. 2 Eminence P-50 speakers. Tube reverb.
As far as bells and whistles go... I really do not know of anything more someone could ask of an analog tube combo... There are all these modeling combos that do loads of things... but this is the real deal. These are the tones they try to emulate.

Simple. Hmmm.. yes, and no. This is a combo amp... but you really do have a lot of different knobs you will need to turn to get where you want. The controls are extremely interactive.. to the point where you need to be careful in your adjustments, as you might be closer than you think, and over-adjust.. so...be careful!
Manual. Huh. I think it was a sheet of paper. It mentioned a presence control.. which this amp actually does NOT have. Yeah, the manual does not really help.
I give this a &quot;7&quot;.. It is pretty complicated for a tube amp. Like I said.. lots of bells and whistles.

Sadly, I don't own this amp anymore.. But it DID suit my style... thinking about getting another one. Yes, I am a doofus regarding equipment. Should have kept it, but got rid of it on a whim. Lots of gain. Nice, barking modded Hiwatt tone.. somewhere between that and a Marshall. Used to run my Keeley TS9 in front of it. Nice searing harmonic ripping, screaming gain. Wow.It does have a real flamethrowing type characteristic when you run a Tubescreamer in front of it. And scoop out the mids on the graphic e.q. NOT a mesa tone.. or what you hear from every band out there on Clear channel radio stations. It is definitely it's own animal. Telling this story is starting to hurt.

The clean tone reminds me of Vox AC30 clean fatness.. not really a &quot;Twin&quot; type tone.. but it may have been the speakers as well... The P50's seemed to really have a mid heavy character to them. Still a very good tone.. very alive and breathy. Class A mode.. does not get squishy. It just seemed to get grainy.. Maybe I should have cranked it louder..
Used this with Les Pauls, Strats.. different guitars. It definitely notes the differences between every guitar.

Had it a bit over a year.. struggled with the mids with this amp.. I loved the aliveness.. The searing, scalpel-precision quality for leadwork.. without brittle harshness.. a very cool amp. I regret getting rid of it, and one day may go ahead and scoop another one up. I think perhaps that the biggest problem I had with this amp was that it was great for lead.. but not so tight for rhythm.. Maybe it was the EL34 &quot;chugga-chugga&quot;.. but I was used to 6L6/5881 tightness. This amp was very dark and a bit loose compared to my other rigs.. so, sadly I made the mistake of getting rid of it.. Instead of keeping it in my arsenal. Have tried many amps. You would think by now I would just keep them without selling them unless I truly don't like them. Sigh. Someday I'll learn.
I got this amp for 1550.00.. with the graphic e.q. option. It was a tremendous value. For that price and the features, I would absolutely buy it again... and pair it with a Single or Dual rec for rhythm... and maybe a Twin for the cleans.. and a Soldano for sick lead.. yeah...!!
Did you find this review helpful?yesno
Cookies help us improve performance, enhance user experience and deliver our services. By using our services, you agree to our use of cookies. Find out more.