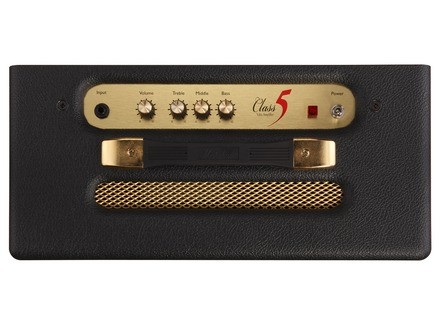 View other reviews for this product:
5 watt all-tube
see general characteristics it is unnecessary to repeat 15 times ..
Wholesale on paper we have a great amp in a range "small power" amp is as beautiful as in the great tradition of vintage marshall is after it's drip pan ..

simple but to use son..je not understand the reviews that I read here in droves ..
no gain and master Separate a volume item!

I've tried both versions, one that had this unbearable vibration and the second version that had cette..vibration unbearable .. yep after an exchange of the amp's tube to sav, the problem persists, return to the second store and sav marshall and then we propose the second version of Exchange, brand new, great !, ok (I say "they mean business in Marshall sav!) except that the amp finally arrived at home, and là..vibrations !! when you push the amp bim! speak now sound ..
for clean sounds, blah, it's very average and if you push the power, no clean sounds because with five watts, crunch it very quickly, and what crunch! very fuzzy, dirty, it dribbles, everything I hate, no vintage grain as we have love in all the 70 albums that made us want to play guitare..y not mind Marshall I find this amp, the overdrive gives the lamps is really dirty, it looks like transo pushed too far, I specified that the sound was the same on both versions, so the hypothesis of a bad series 2 times in a row is discarded. the sound is dark, with a guitar humbuckers treble donf still lack clarity is amazing! simple (strat type) are doing better but hey ..

for short, in my opinion, it is unnecessary and even foolish to buy such an amp that sounds pretty bad in any case unworthy of the reputation of famous brand at a price "Marshall" if it is to play in his room or repeated, you'll have more fun with a roland cube that offers more features and better sound! yes, I'm not afraid to say since I've owned a cube 30 and it sounds better than class 5 of Sim 'classic stack "(marshall!) it's crazy right?
a board, do not let yourself be fooled by the siren song, take off your blinders and look right and left, are better for a lot cheaper .. I think this amp is designed for beginner guitarists who want " label "for those who want sound look elsewhere or try before, after all we have the right to love the crappy sound is not interdit..cet review is necessarily subjective as all the others but I still think for the proposed price it is reasonable to expect something else.
See the source
Did you find this review helpful?yesno
Cookies help us improve performance, enhance user experience and deliver our services. By using our services, you agree to our use of cookies. Find out more.