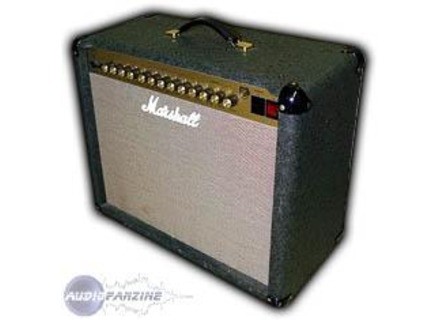 View other reviews for this product:
2 channels, reverb, a footswitch, an insert effect and a second in parallle.

3 knobs for EQ + gain + volume + volume reverb per channel. A master volume and a volume of insert effect. A final knob for the presence derrire. XLR etc etc. ..

It's not an amp "modern" with tons of possibilities or rglages. It is a simple and effective combo, you plug and rings, we correct a little EQ and go.

This amp is known for its FAILURES!

Marshall stopped to produce it after a year. the silent era it was declare it "limited edition" but it has subsequently proved to have design problems. Many of transformer and other problems.

This brings me to the reason for my post: If you have any "drops" of volumes after a while it may be a problem of oxidation at the jack circuit insert FX (yes it is vicious.) galr Having a moment with a, and n'tant not alone, I'll file a trick to dpanner: connect the two ends of a Jack in the in and out of the exit insert FX, you by-pass and the cable causing the problem, before attempting to solder / change of that cable. Hoping to help

I bought this amp in '95, one year of production. In the silent era he cens resume CHARACTERISTICS JTM45 amps used by Hendrix among others. So it's a combo "vintage" in its warm, good dynamics, grain nice and correct without reverb.
With a good distortion you will reap the big sounds fat. Put a fuzz face, a Vox wah, a little reverb (I still miss the Univibe) and personally I'm in heaven (

on the other hand, fan of nu-metal, grindcore, or steve vai go your way ...

When he walks, I love really good
See the source
Did you find this review helpful?yesno
Cookies help us improve performance, enhance user experience and deliver our services. By using our services, you agree to our use of cookies. Find out more.