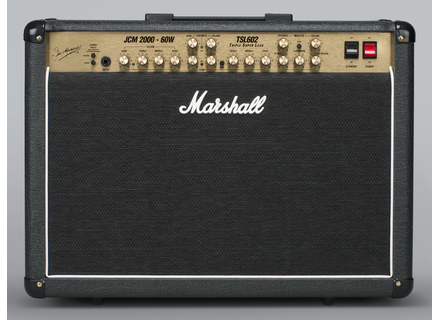 View other reviews for this product:
The Marshall TSL602 is a 60-watt 2 x 12 Guitar Amplifier with three channels, one clean and two overdrive. The amplifier is powered by two EL34 power valves and driven by four ECC83 preamp valves. The speakers on-board are two specially-designed "Wolverine" speakers made and voiced specially for this combo by Celestion. The clean channel has a dedicated EQ and the Overdrive channels share an EQ. All of the standard Marshall appointments are on-board: Effects loop with mix control, Deep Switch and Tone Shift, and an emulated line out.

I purchased this amp the same week I purchased my DSL401 1x12 combo so I had a great basis for comparison. The TSL602 is a 2x12 combo with 4 ECC83 preamp valves and 2 EL34 power valves. The speakers are custom "Wolverine" speakers that to my ears needed to be replaced due to overall flat tone. I tried replacing the preamp valves with both Ruby Select tubes and Mullard reissues. Nothing helped the tone of this amp. Even using a 4 x 12 extension cab with 2 x Vintage 30 and 2 x GT12-75 drivers the tone just didn't stand up. Plugging the DSL401 into the same cab yielded brilliant, complex, sweet overdrive... classic Marshall. Even on its own the DSL401 tone destroyed the TSL60.

I play most of my standard Dimarzio-equipped Neal Moser guitars, Ibanez, and Gibson guitars such as Les Pauls and SGs. The TSL seemed a little unstable compared to the DSL. The footswitch was jittery and due to the tone of the speakers I couldn't tell if they were blown or just sounded poorly. I wouldn't gig this amp at all.

I don't know if it was the difference between the power valves (4 x EL84 vs. 2 x EL34) or the speaker complement, or just that this is a poorly-designed amp, but I just couldn't get a useable tone out of it. The other thing that I found audacious is that the DSL is represented as a 2-channel amp (Clean and Overdrive) with a second, boosted overdrive that is a simple +20db boost on the OD1 channel. The TSL is represented as a three-channel amp. I don't really see where calling the +20db boost a third channel magically transforms it, even if you add an independent gain or reverb control. Everything about this amp was just flat, even with pedals, external EQ, etc. I eventually sold this amp and kept the DSL401 which still produces brilliant tones to this day.

I think for the price of the TSL line anyone would be better served spending the money on a DSL and enjoying better sonic quality. Unless something miraculous happens I'll never own another Marshall TSL amp.
Did you find this review helpful?yesno