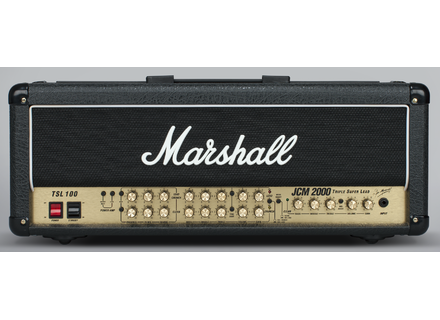 View other reviews for this product:
The Marshall TSL100 was designated as Marshall's flagship amplifier for some time, and indeed on paper it looks to be a killer amp. It's designed a lot like the DSL series, and is a 100w tube head that is powered by four EL34 tubes. There are three channels ranging from clean, to crunch, to lead, and there are many different settings that Marshall claims will offer a wide variety of pleasing tones. Here's the full list of specs:

Setting up this amp is almost pointless because of how generally awful it sounds. The three channels really just provide different levels of harsh and scooped tones, varying in levels of fizz and gain. I've never been a fan of how the EQ reacts on Marshall amps and this one is no exception. The controls really all seem to control a narrow range of frequencies, leaving the extreme low end and high end untouched... if you don't like it how it's set stock, too bad. To its credit, the interface of the amp isn't too bad but dialing in a tone that's not either scooped or loaded with high end fizz is all but impossible... though that's a common malady of modern Marshall amps anyway.

I've tried this guitar with various Fender and Gibson guitars. This amp really just doesn't cut it for me. It seems to have been designed to be a killer all in one amp that could handle everything from clean to mean... but really doesn't do any of these things remotely well. The clean tones were thin and brittle overall, with a seriously piercing high end that I just couldn't dial out. I like a slightly fuller clean tone overall (IE: Fender or Mesa) and this amp's clean just sounded forced and mediocre. The distortion channels really are just fizzy and lifeless, but one of them has more gain and compression than the other one. The gain structure is nothing like the classic Marshalls of old, nor other flagship 3 channel amps like the Mesa Dual Rec or Soldano Decatone. The amp is very compressed and buzzy, and given that the EQ has an extremely limited range of tweaking available, there isn't much I can do to dial out the fizz and tame the ever present high end problem. Ah well.

All in all, I wouldn't recommend this amp. The fact that it sells for $1800 new is a fairly strange concept to me, as you can get something like a Splawn Quick Rod or a Mesa Mark V for not much more, both of which will SMOKE this amp. It really doesn't live up to the hype that Marshall built for it and I can't recommend it in good faith to anyone. I'd say to stay away from this or the combo companion (TSL122) unless you have ears that love fizz and untamed high end.
Did you find this review helpful?yesno