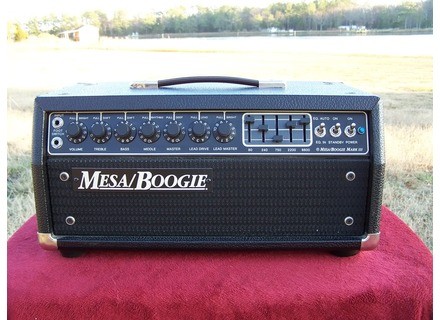 View other reviews for this product:
The Mesa Boogie Mark iii a mysterious amp to most. The lack of coverage on this model as compared to the rest of the Mark series amps has led many to pass on them despite being quite versatile. The Mark iii features three channels-- clean, rhythm 2, and lead. The channels share a global EQ stack but separate master volumes and gain controls. A decent amount of space is saved on the front panel by incorporating several push/pull functions to the dials. The amp features two individual bright switches, a deep switch, two shift controls, and the ability to toggle the channels via push/pull as well. A graphic eq is standard fare on most Mark series amps and is not left out here. Around back you have a direct out with level control, effects loop, reverb and presence controls, as well as a toggle for the simul-class power section. The look of the amp is very classic, the wicker grill on select models being a real eye-catcher.

The options for tone shaping on this amp are incredible for such a small package. Between the simul class control, the graphic EQ, and the myriad of push/pull functions, it is very easy to forget that this amp is so inexpensive. The Mark iii maintains excellent clarity at high volumes and is easier to dial than the mark V that I also owned. Build quality is splendid, I could see myself gigging with this amp without hesitation.

I played through the Mark iii with a Gibson Les Paul Traditional. Mesa 2x12 cab. No pedals.

The clean channel is alot like the mark i that I've tested. Very round and bottom heavy. This channel would suit players with tele guitars well, being able to tame the inherent trebles in such a guitar. It was somewhat dark with the Les paul but livened up with the bright switch engaged. Rhythm 2 was my least favorite, but was still a better sounding crunch than on other designs in the price point. Winding up the volume with the lead channel gave great results. The presence control around the back of the amp helped dial in the amount of aggressiveness I wanted. I was able to get both mellow lead tones and aggressive power chording with minor adjustments. The onboard reverb is plenty useable as well.

The Mesa Mark III amplifier may not be the most popular amp of the line, but is extremely good value with considering the versatility available. The going price for these on the used market is around $700. If you need a comparable feature set but desire updated aesthetics and sound quality-- you might look at picking up a Stiletto Ace for a mere $200 price jump. However, if you are on a budget and want the Mark series tone, this is all you need.
Did you find this review helpful?yesno
Cookies help us improve performance, enhance user experience and deliver our services. By using our services, you agree to our use of cookies. Find out more.