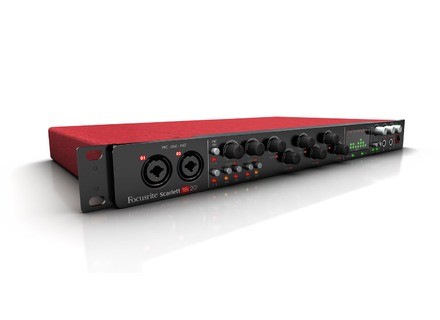 View other reviews for this product:
- Which technical specifications motivated your choice?
The number of I/OS, the brand.

What do you use it for?
Mobile recording and as audio interface for my keyboards (Mainstage).

Do you use it with other instruments or systems (mixing console, preamp, DtD, ...) and what's your setup? ...
For recording I have used an ADAT Marian (ADCON) converter to have free analog I/Os, otherwise I use ADAT cards on digital consoles...depending on the setups I find where I go. I almost only do demos, to be true.
For my keyboards, I use simply the MIDI interface of the Scarlett, together with a UM550 for MIDI routing of two keyboards and a pedalboard.
The audio of my Prophet08 is processed within Mainstage and then sent to the Scarlett.
I use 4 analog outputs (1 stereo for the stereo sum, in case the console is too small, 1 stereo for my personal monitoring on stage...And the rest is output separately via ADAT with the 8 outputs of the external converters. That way, the FOH engineer can do whatever he wants from the console.

Are the drivers stable?
Yes. Very stable, actually. To be honest, since I switched to Focurite, I have no problems in this respect. I used to have a Digi002, and it was a nightmare, but now I'm pretty chilled.

Are they up to date?
No, but when they work fine...

Which software do you use?
Logic pro 9, Reason 7 and Mainstage 3. Everything works smoothly. You only need to be careful with the launch options (32 bits/64 bits) so everything works together, but otherwise, it works fine.

What's the latency of your system?
On paper, too high.
With a 256 buffer, the software displays a round-trip latency of 20ms...But, actually when I play on top it's almost imperceptible. And I am pretty sensitive to such details, so I suspect the real latency value to be equal or less than 5ms with this buffer value.
And also knowing that my Mainstage uses a lot of resources (sometimes 6 or 8 virtual instrument tracks with my prophet08 which goes through the Scarlett and Reason in the background, the CPU gets really hot).
So I take some precautions.
To be true, recording live (even with 16 tracks) I can lower the buffer to 128...But, in the end, it's absolutely useless for what I do. So its awesome!

How many tracks can you record/playback simultaneously ? ...
I have already recorded 16 tracks. I haven't tested the playback, but I use 10 outs live and it works smoothly. I think you can push it to the limits without any problems.

Did you have any problems during the installation?
Yes, you need an Internet connection to get the drivers.

Did you have any incompatibility problems?
Not for the time being.

How complicated is the overall configuration?
It's easy, even if I don't like the Scarlett MixControl software...But, at the same time, with such number of ins/outs it's not easy to offer routing options that are clear without a Rube Goldberg machine. Personally, I haven't used it much. I muted all hardware monitoring from the interface to use software monitoring (or real monitoring on a hardware console before the interface, when I do demos).

Is the user's manual clear and comprehensive? ...
Yes. But, at the same time, it is dispensable.

How long have you been using it?
7/8 months.

Which feature do you like the most / the least?
The most: The stability
The least: The complexity of the MixControl software...But I think you can get used to it if you dedicate some time to it, which I haven't done. But it's no deal breaker.

Did you try any of other models before buying this one?
I had Focurite Saffire 6...at home, due to my laziness of having to take it off the rack every time to work. And I was very happy with it, given the stability of the drivers, so I decided to be loyal to the brand.

How would you rate its value for money?
Regarding the number of I/Os, very good.
The preamps are neither excellent nor bad.... they are OK and do their work. An interface with 18 inputs equipped with 8 preamps and a Wordclock output, for this price —and seeing how it all works—, is a good investment, I think. For the time being, at least.

Based on your experience, would you buy this product again? ...
Certainly!
Considering my budget. I think that if you want something better without compromising on the number of I/Os and features, you need to fork out a lot more with other brands. So, yes, I'd buy it again without hesitation.
Did you find this review helpful?yesno
Cookies help us improve performance, enhance user experience and deliver our services. By using our services, you agree to our use of cookies. Find out more.