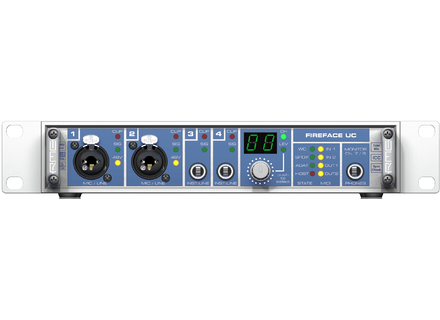 Buy this productView price information >
View other reviews for this product:
I needed a portable config not too expensive, so a USB sound card to use with my laptop (600 euros) that allows me to get a few channels at the same time and with proper quality and reliability.
I would have added a converter 8 in / 8 out behringer ADA8000 (about 200 euros) and
a behringer headphone amp (50 euros), I could put everything in rack on wheels with a housing for the computer (2U Gator Fly: about 50 euros) and here I am with a mobile config to less than 2000 euros and holds up, for the fans.

Question reliability of the RME, no problems so far, latency correct for use with virtual instrumentals of the moment (it depends on the computer, mine is not overkill), and stable drivers, question quality I am filled, two XLR inputs on the front seems to be equipped with a good preamp very clear and precise, no "noise", the two following entries in jack for connecting a guitar or bass or whatever you want, but for a scratch c ' the top is to use the virtual rig, no noise either, the real stuff, no gadget, a simple design and pro, it's not the RME on the cheap, it's just a sound card usb pro in the only in this category I think.
So to summarize:
up to 16 simultaneous inputs with a latency used to make real-time, including 4 with pro-quality preamps. (It's better to invest a little more than me in the computer to really enjoy it)

Installation very easy, in fact I do not remember really, but if it does not mark me is that it had to be simple and rapide.Pas crash or conflict with the sound card of the native 'computer, I use Cubase 5, Live 8 and a lot of plug ins, I have no particular concern, sometimes some plug "doubtful" plant with Live, but I think that that is the RME that is in cause.
The software that manages the card is quite logical and intuitive for someone who knows a bit consoles, the patch and routing in digital audio for a beginner it may be not so simple, but it does the is never, in any case I tested the MOTU 896 mk3 and there by the software against hated, certainly more complete eq, reverbs and all but too choppy, too gadget too, had no need to all this, I was Soulé.
With the RME I not need the manual to tell the truth is clear.

I have been using for over a year, no worries, I do not regret at all the investment, I doubt that it must scare a bunch of people 900 euros for a USB sound card, but in fact all depends on what you intended.
I have sold my home studio config, I had a 01V96 and a RME 9652 on a tower PC, I did not like the sound of the console preamps and I could not move without feeling with moving, Now I have a real sound, and the ability to move and all that without spending the big thing, thanks to the resale of my old stuff. Well, before testing the MOTU RME I tried adjusting the first mini firewire port of my laptop (total failure), then adding a Firewire Express card (with Texas Instruments chipset) and it played but there it's often cracked, adding that the software malfoutu, it did not. Now I finally have the equipment that suits me in terms of quality, reliability and ergonomics.
See the source
Did you find this review helpful?yesno
Cookies help us improve performance, enhance user experience and deliver our services. By using our services, you agree to our use of cookies. Find out more.