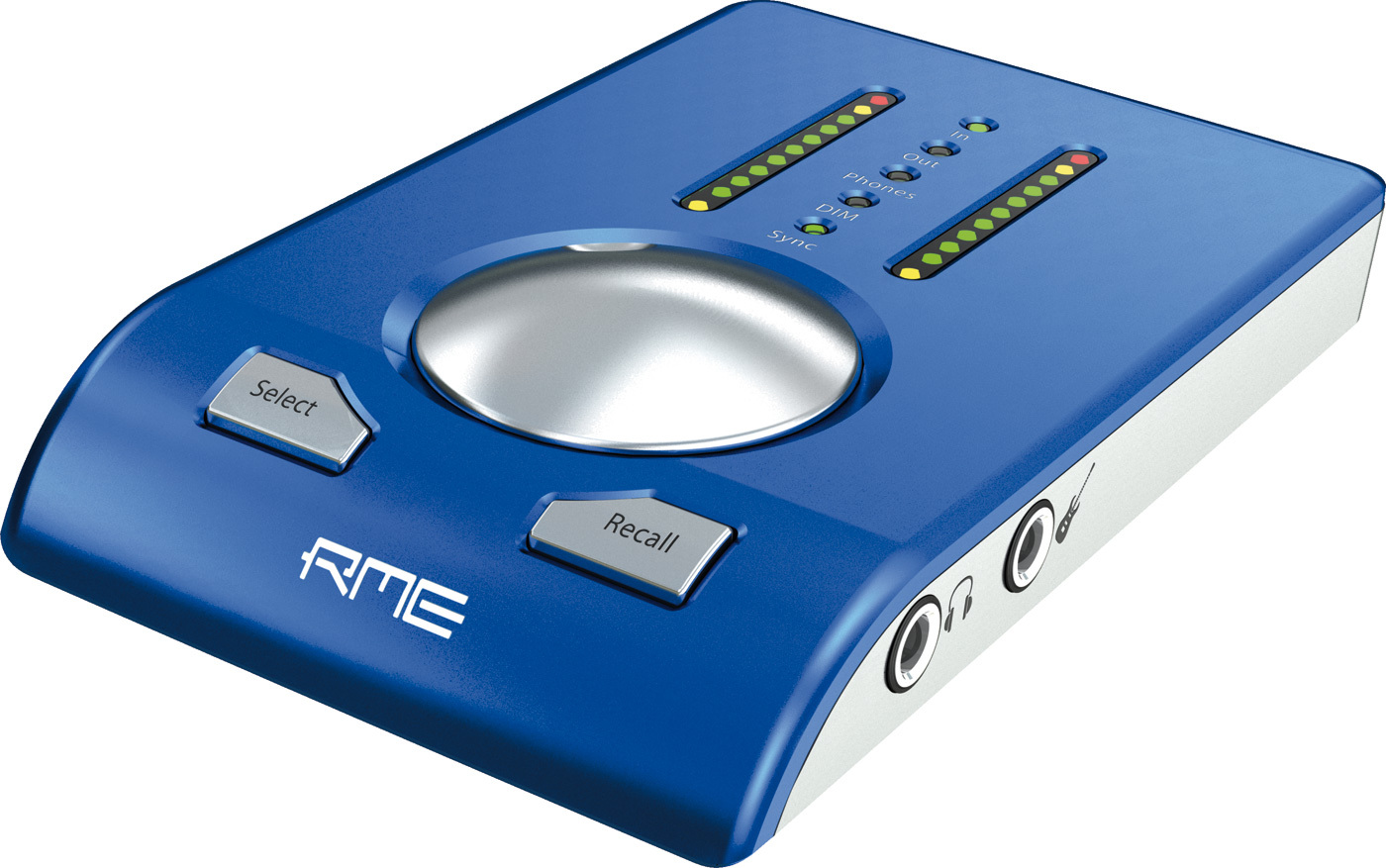 Most manufacturers have been adding compact audio interfaces to their product range for several years, and now is time for RME and its Babyface. Many mobile musicians and sound engineers have been eagerly waiting for this new USB2 compatible interface...

This end of year is full of new launches at RME: the high-end Fireface UFX (already reviewed by AudioFanzine) and the Babyface, which belongs to the affordable line of RME products. The word “affordable” is relative, of course, considering that the Babyface’s price tag is nearly $750… However, the Babyface is the German manufacturer’s most compact and affordable external interface and it will surely appeal to mobile home-studio owners searching for quality.

As soon as we received the product a few days back, we made a small video while unpacking (in French but you get the gist):

Inside the box you’ll find the user’s manual, a breakout cable and an extension cable to add inputs and outputs to the Babyface (see below), a USB2 cable, a nice transport bag to carry the interface, the cables and a mic (for example), and the Babyface itself with its blue and gray finish. The interface is quite compact (3.9“ x 1” × 6.3") but it is heavy enough (1.1 lb.) to sit stably on your desk — it feels sturdy. This impression is reinforced by the metal housing with the typical RME blue finish. Only the knobs are made out of plastic, and the aluminum jog wheel seems to be a little less sturdy than the rest of the housing.  No doubt, the first few months of intensive use will show if it has what is takes… 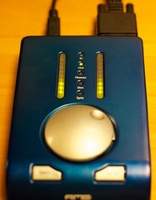 In spite of its compact size, the Babyface offers comprehensive connections: two mic inputs on XLR connectors, line outputs (on XLR connectors as well), MIDI in/out on 5-pin DIN connectors, and a headphones minijack output (which can also be used as line out). All connections are routed through the breakout cable, linked to the Babyface via a 25-pin D-Sub connector, similar to the ones on VGA graphic cards. On the interface itself you have an instrument input, which replaces the second mic input when activated via the TotalMix FX software, and a second phones out which is electrically linked to the first one. This means that the maximum output volume decreases when two headphones are connected at the same time, and also that both outputs deliver the same audio signal. In other words, you can’t send different mixes to the headphones. You’ll also find an ADAT Toslink input and output, which is a rather nice surprise considering the size and price of the interface. The ADAT option allows the user to connect an external converter and add 8 in/out channels. Nice! Finally, the interface features a connector for an external PSU (not included) and a USB cable with two connectors, in case the USB bus of your computer doesn’t provide enough current (the manufacturer states that the Babyface requires 300 mA).

On the top panel you’ll find some LEDs and buttons to control certain parameters without having to use the TotalMix FX software. The jog wheel allows you to control the gain of both analog inputs (simultaneously or separately), the volume of the main line outputs or the phones out level. You can select the mode (In, Out or Phone) using the select buttons underneath the jog wheel. A simple click on the jog wheel allows you to activate the dim function (temporary volume reduction) while in Out or Phone mode. The last LED shows the sync status of the digital clock. The source of the clock can be internal or external (via ADAT and S/PDIF).

Two 10-segment LED meters show the level at the inputs or outputs, which is a very valuable feature considering the size of the interface. Usually, manufacturers use only one or two LEDs for similar products… Well done RME!

Now, let’s take a look at the software package included…

Once we installed the drivers on our iMac, a setup window allowed us to set the sample rate, clock source and format of the optical out (S/PDIF or ADAT). But even more interesting is the TotalMix FX software, which we already got to know during the Fireface UFX review a few weeks ago. We invite you to read or reread that review because the virtual mixer is almost the same on both interfaces.

The only differences concern the number of channels (60 on the Fireface UFX and 22 on the Babyface) and the insert effects. Actually, the Babyface doesn’t include the dynamic module with compressor/expander and auto-level. It’s a disadvantage indeed, but you still have the 3-band EQ, the low-cut filter, the reverb, and the echo effect, which is quite good considering the price of the interface.

Thanks to the Fireface UFX, we already know all other features so we’ll only say that the TotalMix FX works very good and is very easy to use. It lacks almost no function: solo, mute and fader groups, snapshots, loopbacks, matrix mode, etc. The GUI seems to flow even better than during the UFX review, which is certainly due to a recent update!

OK, let’s connect a mic and a guitar!

We didn’t need to connect the interface to the mains power because our iMac’s USB port delivers enough current to feed the Babyface. With the minimum buffer size (32 samples), we got 2.449 ms of input latency and 2.154 ms of output latency, which are pretty good values. The converter latency reaches 1 ms max. depending on the sample rate:

Here you have a latency overview with Guitar Rig 4 Pro:

With this buffer size it is evidently better for you to have a very powerful computer and don’t use too many plugins. In order to check out the preamps and the converters, we used our Gibson J-200 acoustic guitar and an Oktava mk-012–01 microphone (the same as for the Fireface UFX review). Do note that the microphone has a somewhat low output level, which means that that you’ll have to turn the gain almost three quarters up with most low and mid-range audio interface preamps in order to get a decent signal level. However, turning the virtual gain control of the Babyface halfway up will be enough. This means that the headroom is high (60 dB according to the manufacturer). Moreover, we couldn’t notice any noises or distortion, and the sound stayed very linear. A very good performance. We just regret not having the possibility to set the gain level more precisely than in 3 dB steps. The converters provide a very good sound quality with a remarkable signal-to-noise ratio.

We tested the instrument with our Gibson Les Paul and Guitar Rig 4. 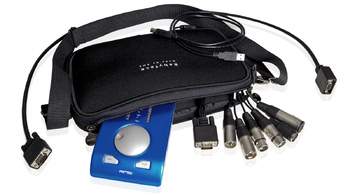 The EQ, reverb and echo effect sound very good and seem to be the same as on the Fireface UFX. The stability of the interface was outstanding with our system, although we did notice some noise with the 32-sample buffer. But do take into account that our iMac is not exactly the fastest (Core 2 Duo at 2.4 GHz).

If you need more inputs and outputs, you can link up to three Babyfaces, but you’ll also have to manage three TotalMix FX instances, which is not very practical. For this purpose we recommend the use of the ADAT interface, which seems much more convenient.

In comparison to similar interfaces, the Babyface belongs to the “ultra nomad” category and is the only product providing the ADAT option. The Apogee Duet is cheaper but doesn’t support Windows and has neither digital in/out nor integrated processing or effects. There are other interfaces that can, technically speaking, compete with the Babyface (like the MOTU Ultralite mk3), but they are more bulky.

RME succeeded in launching a compact and rugged interface with remarkable sound quality. At about $750, this baby provides two quality mic preamps and converters, ADAT in/out, a jog wheel, a transport bag, and a pair of nice-looking VU-meters. Add TotalMix FX —the virtual mixer that allows you to manage all 22 channels and process the signals (EQ, filter, reverb, and echo)— to the package and you get the best mobile audio interface on the market. It obviously has some drawbacks, like the poor precision of the gain controls, the fact that the two headphones outputs are not independent and the dubious sturdiness of the jog wheel, but nothing is perfect in this world…

Shop strengths
Cons
About our reviews
Comments on this article (1)