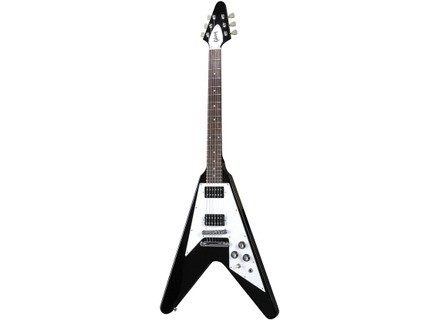 View other reviews for this product:
The Flying V Faded is based on the late-sixties V design in which the three control knobs form a triangle, not the fifties design in which they form a straight line. It's got the usual V features: two humbuckers, mahogany body, ebony fingerboard, and penis-shaped silhouette.

The following things distinguish the Faded version of the V from the non-faded version: It has one coat lacquer as opposed to several, it comes with a gigbag rather than a hard case, it costs significantly less money. You could actually buy this guitar and then buy a hardcase from Gibson and you'd still be paying less money than for the non-faded V. The missing coats of lacquer do not make a difference to the sound (unless, I suppose, you're playing it under water).

Many people who have never actually played a Flying V mistakenly think it will be a) heavy, and b) awkward feeling. The guitar is way lighter and easier to play than a Les Paul, and far more well balanced than an SG (which, to me, always feels like it's going to fall if you don't hold the neck up). Very easy to play and very comfortable to wear.

I guess if you like playing sitting down you wouldn't want one, because it can't be done very well. Standing up, though, it's very nice. In keeping with its comically-phallic aesthetic, it fits snuggly into the crotch. Oh la la!

The ceramic magnet pickups that come with this guitar (and all Flying Vs) are good for metal. By &quot;good for metal&quot; I mean that they are extremely high-output and make even the warmest-sounding tube amp sound like you've plugged the guitar directly into a cheap solid-state PA system. If you do not play metal I highly recommend that you replace the stock pickups. I swapped mine out for for Gibson '57 Classics and, along with the hardcase upgrade I mentioned earlier, this is now my main gigging guitar. Furthermore, I made back much of the money I spent by selling the old pickups and the gigbag, but even had I not sold them I still would have spent less on this guitar than I would have on the non-faded V. And the new pickups make this one sound so much better!

I've had this guitar for about two years. I'm not into metal, and neither are my friends or bandmates (we're all into pretentious hipster music), so whenever I play the V they're always skeptical, until they try it out. Once they try it out, they all say they want one. I kind of bought this guitar as a joke; I was planning on starting a joke metal band and then reselling it, but I'm totally serious about it now. After switching the pickups the guitar just sounds great, and it played great from day one. And, of course, it looks, well, hilarious.
Did you find this review helpful?yesno
Cookies help us improve performance, enhance user experience and deliver our services. By using our services, you agree to our use of cookies. Find out more.