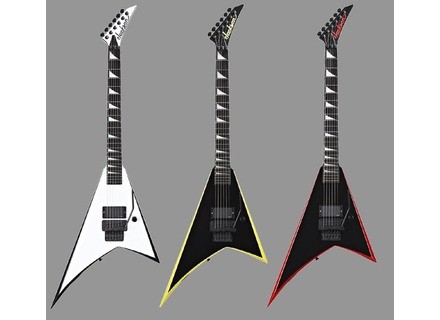 View other reviews for this product:
A 24 cargo while beauty.
A Made in Japan, which has class.
Floyd Rose Original Series
Portar a volume for an emg 81 active
a "fast neck" which become incortournable once tamed.

The Ebony fingerboard is wonderful and mache is small (unlike a Les Paul).

Easy to play and fall in love with this guitar.

Rhoads Model ... we like it or not. I do not want to do without it.

It is very well calibrated level weights (as opposed to pitching RX10).

In a single pickup (EMG 81 active) ... Making it good for hard / metal / hair / puberty but we must not lie to the guitar was designed with satanic purposes and not to defend the widow and the orphan.

I'm playing now with two different set ups. jacksonrr24 recording preamp mesa * * Boss gx-700 in effect in a loop * Mackie Onyx 400-f to stand out in an Alesis RA150 in columns jvc home theater giant. Set up great because I record my rhythm with this setup is very clear from the lamp.

I also use other gadget ... Wireless, wah ... but overall good set up with strong and give ca.

Clean level is nothing that beats the single coils (especially those of my "quest" (cheap guitar with a Stratocaster body) .. but the sound is awesome .. The EMG 81 is when a driver for him.

I also have a Crate 120 watt in which I tried without effect, without flafla. A guitar - a son - the crate ... cest worse the brave shit. I do not think that the cons by rr24 will be for nothing.

I compared with rr1 with 2 seymour and I am satisfied with the level quality / price I think this purchase is unbeatable.

I've been around a year.
The best guitar I have (and I have many) but the only thing deplorable CEST on floyd. I do not know if cest just on mine but the floyd is not very fluid.

I have also been forced to do so after adjustment for me because otherwise the hole or it is not going to put down asser. So the Floyd can not get a + octave upright ... I did put a crooked little to win but hey .... +

I'll probably buy the new model rr24m for the pleasure of having her twin. I hate the maple neck but I'll try. But I am trying to lie because jai actually discovered on rr1 3bay has approximately the same price ... So: P viva made in United States.

NB: When creating I think god had a rr24 white like mine.
See the source
Did you find this review helpful?yesno
Cookies help us improve performance, enhance user experience and deliver our services. By using our services, you agree to our use of cookies. Find out more.