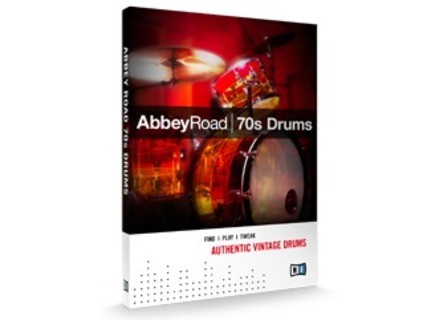 We tested the Abbey Road 60's sound bank about one year ago. In the meantime, Native Instruments has already released three more Abbey Road sound banks: 70's, 80's and Modern Drums. Let's get this show on the road...

Even if the Beatles split in the late 60's, Abbey Road studios —where the Beatles' biggest hits saw the light of day— still exists and has welcomed lots of artists during the last four decades. The Abbey Road 60's sound bank we tested was very convincing, so we were very excited when we discovered the 70's, 80's and Modern Drums versions.

The concept is the same, the decade changes. Sold for $119, each sound bank offers two comprehensive drum kits from each decade. The drum kits were recorded with a nice collection of vintage gear (mixers, compressors, EQs, mics, preamps, etc.) in a legendary studio... enough to make many home-studio owners drool!

The method is the same for these three new sound banks and the software is still the same (Kontakt or Kontakt Player). Thus, you get approximately the same features as for the 60's version, even if Native Instruments offers now some surprises to be discovered...

But let's start at the beginning: pull out your bell-bottoms and travel back to the 70's! 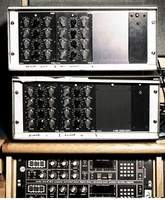 The interface is the same as for the 60's version, only the pictures of the drums change. You'll find two drum kits: the first one is the "Open Kit," a '72 Ludwig Vistalite Tequila Sunrise drum kit with a 26" bass drum, 14", 16" and 18" toms, and two 14" snares (Ludwig Supra-Phonic and Premier 2000). The room ambience belongs to the big room at Abbey Road's Studio Two... you'll have plenty of room! As for cymbals, you get three crashes, one ride and a hi-hat from Paiste. The second drum kit is called "Tight Kit" — yes, the sound is tighter. It's a 70's Premier kit with a 22" bass drum, 13", 14" & 16" toms, two 14" snares (Ludwig and Maple Shell), a Zildjian hi-hat and four Zildjian cymbals (including a pang cymbal). This drum kit was also recorded in Studio Two, but with acoustic panels to provide you with a less reverberated and more punchy sound. You could say that each kit complements the other.

The 70's sound bank is different from the other Abbey Road drums because the Ludwig kit ("Open Kit") uses an alternate mic set, to try to imitate the technology developed by Glyn Johns, a sound engineer who worked with the Beatles, Bob Dylan, Led Zeppelin, the Who, the Clash, and many others... He used to record drums with only four mics: a pair of overheads, one mic for the bass drum and one for the snare drum. The sound is very open and takes advantage of the great acoustics in Studio Two at Abbey Road. Regarding microphone settings, besides the direct mics, you get two mics for the snare (top/bottom) and two mics for the bass drum (inside/outside), a mono overhead mic, and two room mics. This ought to be enough to choose between modern and vintage sounds. 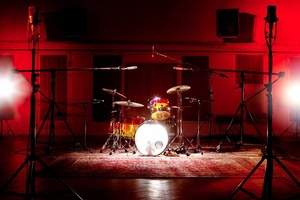 Everything has been recorded at 24bit/44.1kHz. The sound bank is 6.3 GB big (14 GB uncompressed), including 29,000 samples for up to 30 velocity layers per element and six variations per layer. Also notice that separate left-hand / right-hand samples are available for snare, hi-hat and toms. The only thing we are missing, just like with the 60's version, is a bank of MIDI files. To sort of compensate for that, the software provides General MIDI, V-Drums, DrumIt Five, EZPlayer, BFD, iMap and Addictive Drums support, you just have to select the mapping preset you need.

In order to try out the sound banks, we used MIDI files from the Toontrack Songwriter packs. We found the two kits are complementary and can be used in modern or vintage contexts, from soft ballads to big rock songs, depending on the mix: more or less direct mic sound, more or less room sound, mono or stereo overheads, etc. The Open Kit sounds really huge with the Studio Two acoustics and each snare has its own sound character. Below, you'll find six sound samples to make your own opinion:

At AudioFanzine we care a lot about home studio owners, so we also exported all tracks of a one-minute sequence to 24-bit WAV format in order for you to be able to import them into your sequencer and listen to all drums separately or even mix them together... However, we had to choose the snare drum for you.

The 80's sound bank was released some months after the 70's collection. The miking and mixing techniques used for this library translate nicely into the very typical sound of a decade when there was a lot of experimenting with sound going around. The GUI is almost the same and the samples were recorded with two drum kits: The "Black Kit" is a Yamaha 9000 drum kit from the mid 80's with a 24" bass drum, 12", 13", 14" and 18" toms recorded in Abbey Road's Studio 3. The "Chrome Kit" is a Slingerland Magnum with 13", 14", 15" and 16" toms without bottom drumhead — very trendy in the 80's! The Yamaha 9000 comes with two 14" snare drums: a maple Gretsch and a copper Ludwig. The Slingerland includes three 14" snares: maple Pearl, a deep (10"!) wood Ludwig and a chrome Slingerland. All cymbals for the Yamaha kit are Zildjian (two crashes, one china, one ride, one splash, and hi-hat). The Slingerland kit includes a mix of Sabian (crash and ride cymbals) and Zildjian (china, splash, hi-hat). The mics used were Sennheiser MD 421 for the toms, AKG 414 or SM 57 for the snares and Neumann U 87 as overheads and room mics. Note that the second overhead is the famous STC 4021. 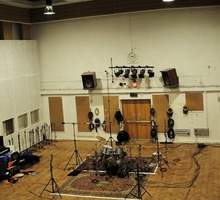 The samples were recorded on a Studer A820, a 24-track 2" tape recorder, with Neve Air Montserrat and 1081 preamps, EMI TG12413 limiters and Prism ADA-8 converters. As usual, top gear and no anachronisms (except for the converter, of course!). The sound bank is a bit larger than the 70's one: 19.8 GB uncompressed for more than 40,000 samples at 24bit/44.1kHz. Each element can include up to 27 velocity layers and six variations (round robin).

However, the most distinctive feature of the 80's bank is the famous gated room track that provides that particular 80's sound. When set properly, the gate cuts the reverb's tail out of the ambiance track, thus, producing a huge but still compact sound. In this sound bank, two room tracks (one mono, one stereo) were recorded with a replica of the Talk Back compressor that was included in the SSL E-Series mixer. This compressor is quite aggressive, considering the application it was developed for, and it gives a special color to the room sound. A Gate page allows you to adjust some of the gate's parameters, which is a nice detail. Beginners don't need to panic: the settings are quite simple and some very useful presets are included. On the Gate page, you can adjust the gate level for bass drum, snare drum, toms, percussions, and cymbals. You get an AHD envelope (Attack, Hold, Decay) and you can adjust the master level of the mono and stereo gates.

Like with the 70's bank, we used MIDI files from Toontrack for the sound samples. The sound samples below include both drum kits with all available snares, and also the Black Kit with the famous gated reverb. The sound of the two kits is quite convincing. The three snare drums in the Chrome Kit are very complementary. The sound is pretty modern with "punchy" bass drums to give that typical 80's touch to your modern productions.

Once again, we exported the individual tracks so that you can download them and import them into into your favorite sequencer! 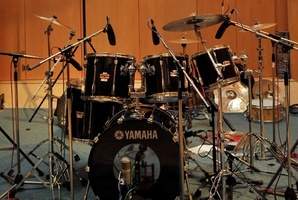 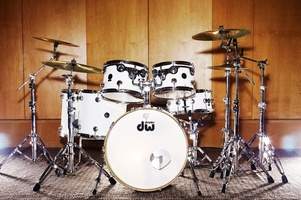 Finally, let's have a look at the newest sound bank called Modern Drums, which includes two drum kits: a maple DW Collector's Series from the mid 90's and a Pearl Reference from the new millennium. The first instrument, called White Kit, was recorded in Abbey Road's Studio Two, while the second one, called Sparkle Kit, was recorded in Studio Three. Native Instruments says that the DW is best suited for rock and the Pearl for pop. But then again, that's very subjective! Each kit complements the other rather well. Since they were recorded in two different rooms, the kits have their own sound character: the DW includes more room while the Pearl sounds tighter. The latter is provided with three snares: a 13" DW Edge, a 12" Pearl Sensitone Custom made out of steel alloy, and a 14" Pearl Sensitone Elite made out of brass. The kit itself includes a 24" bass drum, 8", 10", 12", and 16" toms plus four Zildjian cymbals (two crashes, one ride, one splash), a Sabian china, and a Zildjian hi-hat. 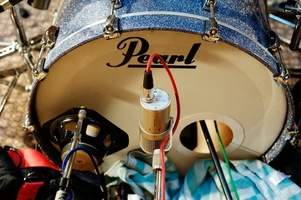 The DW includes a 22" bass drum, 12", 13", 16", and 18" toms plus three 14" snares: a DW Collector's Stainless Steel, a maple Ayotte Custom and a Sonar Artist Bronze. The cymbals for the latter are two crashes and a china from Sabian, a Zildjian ride and an Istanbul splash.

The microphones used to record the samples are all classic pieces: Neumann U 47 and KM 84, AKG D 112, Shure SM 57, Sennheiser MD 421, and a Brauner VM1 for the stereo room. The mics ran through Neve (1081 and Monsterratt), Germanium, EMI TG12428, REDD.47, and Summit Audio TPA 200B preamps. Compressing and limiting tasks were assigned to a Fairchild 660 and an Empirical Labs Distressor. The converter was still the Prism ADA-8. No tape recorder this time, instead they used a direct-to-disk system, very suiting for the new millennium!

Modern Drums includes some surprises regarding the miking techniques and the audio gear. The bass drum was recorded using a Yamaha NS-10 woofer (!) rewired as a microphone so that it can capture very low frequencies in front of the hole of the drumhead. You also get a "Splash on snare" sound (a splash on a snare drum) in the Pearl kit, three Sabian Chopper cymbals and a Zildjian Spiral Trash recorded in Studio Two. Here are some audio examples including these peculiar sounds:

Generally speaking, the sound of both kits was very satisfying, even if the Sparkle Kit includes resonances generated by the bass drum, which are audible in the Big Room sound sample. You'll have to do some tweaking if you want to get rid of the resonances! It's a bit strange because none of the other drum kits has this unpleasant feature. On the other hand, we like the snare drums provided with the DW kit because they complement each other very well and cover a wider sound range than the snares included with the Pearl kit. Listen for yourself:

As always, some WAV files to import into your sequencer: 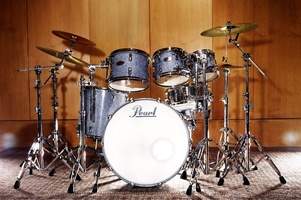 Native Instruments has done a great job with the new Abbey Road Drums (70's, 80's and Modern Drums) to complete the 60's pack released last year. The sound banks still offer the same advantages: the room acoustics of the mythic Abbey Raod studios, legendary drum kits, audio gear that is inaccessible to home studio owners, many velocity layers and articulations, a simple and nice GUI, plus some other useful features. The price is affordable ($119 per decade) but we still regret the lack of MIDI files! The loading time is shorter than with the last Kontakt update and all four banks offer great versatility. We like the small extras provided with each sound bank, for instance the adjustable Gate in the 80's version, Glyn Johns Set Up in the 70's Kits and the strange cymbals in the Modern Drums.