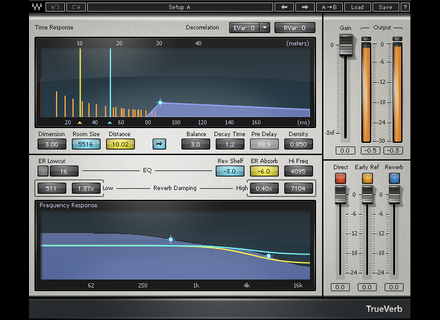 Buy this productView price information >
View other reviews for this product:
There were no compatibility or installation issues getting Waves' TrueVerb up and running. Although basic reverb parameters are easily accessible, the more expressive and in turn more complicated ins and outs of the plug-in take a little while to figure out. However, the graphical interface helps to bridge the gap, bringing the reverberations and reflections together as your custom visual acoustic environment. In turns the presets allow for an easier understanding of the fine tunings of the plug-in that can eventually impart on a track some very professional sounding reverb. The manual for TrueVerb, as with all of the other Waves plug-ins I have used is well indexed and helpful.

Running in Ableton Live 8 on my MacBook Pro with a 2.7Ghz Intel Core i7 processor and 4GBs of RAM, Waves' TrueVerb is as smooth as clockwork, but worry not Windows users as this plug-in is cross compatible. Being fairly light with regards to overall CPU usage, it is stable and reliable even in situations where many other effects and VSTs are operating simultaneously. As far as performance is concerned, I give TrueVerb a thumbs up. Although it is not perfect for every scenario that I use reverb in, it certainly holds a high rank on my list of top Waves plug-ins and is certainly Waves' best reverb VST yet. I've had it for almost four months now and I certainly don't regret my purchase.

Overall Waves' TrueVerb is a must-have if you are a producer who is a fan of the Waves series and needs a reliable reverb plug-in. Despite the slight learning curve, TrueVerb has a fabulous sound and is not too demanding on your system or your patience. As far as price is concerned, you can pick this up in its Native version or the Mercury bundle deal. This is one of the few Waves plug-ins I wouldn't discourage picking up in its Native version. Originally $150, it is now on sale for $64 on the Waves website. Not a bad deal for such a versatile device, but probably still more bang for your buck if you get the Mercury bundle deal.
Did you find this review helpful?yesno