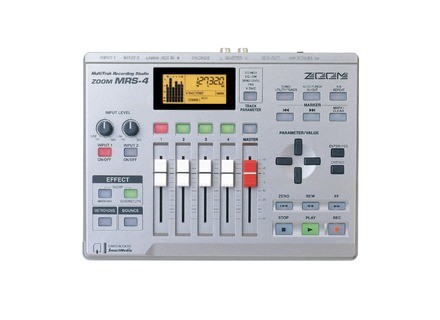 MRS-4, Digital Multrack-studio from Zoom in the MRS series.

View other reviews for this product:
The features have already been seen below, not much to add.

Lack midi in a recess, it 'would have been nice to combine two sets to one MRS4 false 8 tracks

I couple my MRS4 also has a box has rytme (RT323) and the sync is transparent.

Also, when merging the tracks for the "final" stereo, both inputs are used (to adjust input levels via knobs), useful for example, include the part bass / drums after the final mix at BAR . Then, there's more than recover the two tracks on his computer (via a small dedicated software findable on the net) and burn.

Small precision if you plan to burn a CD model, the sampling of MRS4 being a 32kHz, remember to convert to 44.1khz audio via a soft, because if you burn directly, writing software that will convert and it's usually very poorly ca (ca leads to the ear by a crackling sound, like a distortion especially noticeable in the treble).

Machine friendly and pleasant to use.
Some functions will grow at first to plunge into the manual, because they require to navigate further into the menus (they are all small), but quickly becomes logical.

The manual is well done, all the possibilities of the device are detailed.

The difficilte at the beginning, when we do not know much about a chain of recording, personal deficiencies is rather on the basis of the effects. For example, insert effects, send-return, mixdown ... I was a little confused, but I survived and is it going much better now

The effects I pleasantly surprised, I did not expect this quality for the entry-level stuff, there are not tons, but they are effective! (Multiple reverbs, chorus, ...).

Also, I discovered the "covers" of sounds, effects of dynamics that will boost a song, or you make it more pure. I had already found that out in studios a few years, and even if it does not compete on my guitars sound clear and sometimes rather nicely saturated, ca does!

It's been over a year I use this Ministudio digital, and it's good to listen to one song 20 times a day without degrading the sound.

Seriously, when I went to buy this multitrack has the time, I hesitated between the Boss, the Korg and Zoom. I took the photo for his first score pleasant to use, faders good size and pleasant look. The Korg is tiny by side, and gives the impression of having to manipulate the faders a magnifying glass.

I use it first as a memo composed for my ideas, then I used to develop some of these ideas, as far as defining the complete structure of the piece, melodic lines, ... up a sound quality quite acceptable (possibility to make a good model, by managing the tracks).
See the source
Did you find this review helpful?yesno
Cookies help us improve performance, enhance user experience and deliver our services. By using our services, you agree to our use of cookies. Find out more.