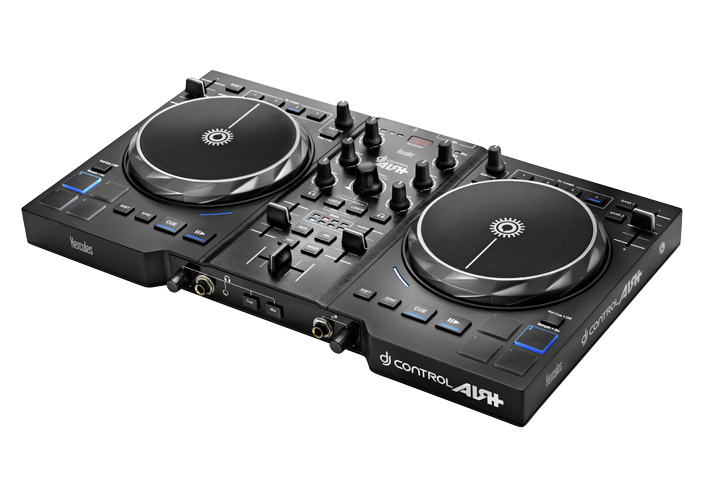 Hercules, one of the pioneers in USB controllers for digital DJs, continues to introduce easily transportable and ever more innovative models, like the DJ Control AIR+ with a very particular feature...

The Hercules DJ Control AIR+ is an entry-level 2-deck USB controller with an internal soundcard and all classic features necessary for digital mixing. It follows the first version (the DJ Control AIR) that came out in 2012 but introduces some improvements, especially the layout of the different knobs, pads and buttons. This control surface comes with the DJUCED 40° software and is also compatible with other programs on the market, like Virtual DJ Pro or even Traktor 2 DJ.

It has a nice style for an entry-level controller. The jog wheels have a predominant place due to their big size (5.9"/15 cm in diameter), which makes the mixer section seem a bit small.

The installation of the software supplied (DJUCED 40°) and the drivers for the controller went smoothly. The latter is immediately recognized by the software and works right out of the box. There’s no need for a power supply unit, since it gets its power vis USB.

The bass/medium/treble knobs are well-spaced from one another, so you won’t have any problems even if you have fat fingers! However, the medium and, especially, the bass controls are way too close to the jog wheels, so you have to be careful when manipulating them.

The AIR of time

There is a pre-listening option with headphones to monitor either one or both decks at the same time, but it is not possible to adjust the transition from one mode to the other progressively with a knob (like on most mixers), it’s a pity.

The mixer sports the four common controls to adjust frequencies: bass, medium, treble, and gain (which can be switched to a filter). A big knob allows us to browse the playlist, while two LOAD buttons are meant to assign the songs to the right or left deck.

Each channel has its own volume fader, whose stiffness is rightly adjusted. It is not possible to adjust their volume curve (nor to reverse them). The curve is linearly progressive, which will suit 90% of DJs when mixing. On the other hand, the curve of the crossfader can be adjusted (from within the software). By default it is progressive and can be adjusted for scratching in ON/OFF mode. However, there is no possibility to reverse the channels (Hamster mode), which is not annoying, once again, if you are not scratching.

There’s also a pitch fader per deck, but it’s a bit short for my taste, making us lose precision when adjusting tempos. The jog wheels sense the pressure from above and thus serve to stop playback. The “Vinyl” mode allows us to scratch (with a sensitivity adjustable via the software) and to move forwards or backwards along the song quickly. The other mode is meant to accelerate or slow down a song that is being played back (pitch bend). A visual marker (a white line) on every jog wheel makes scratching moves easier, improving accuracy according to the same principle of a vinyl. But let’s be clear, the performance is far from being the same. Scratching with this controller is more of a challenge than a pleasure. The SYNC button on both decks allows to us to adjust the tempo of two songs automatically. On the other hand, there’s the Quantize function that allows us to align songs in 16-beat loops (beat-grid).

The DJ Control AIR+ features four velocity-sensitive launchpads per deck: to trigger samples or CUE points (markers placed at specific places of the song), for instance. They are backlit if active, which is very good when we work in dark environments! Plus, they respond very well to touch (their sensitivity can be adjusted from within the software), and they are sufficiently large and well located in relation to the other buttons of the controller.

Each deck can be assigned three effects (from the 10 available) with adjustable intensity (via the infrared sensor) and they can be combined. There is also an overall effects control (MACRO FX) that allows us to activate/deactivate them all with one click. Like most USB controllers, you can create loops on the fly and make their length vary (1/32, 1/16, 1/8, 1/4, 1/2, 1, 2, 4, 8, 16 or 32 beats).

Recording a mixing session is as easy as it gets: you just have to click the REC button once. The controller features a mic input with adjustable volume, plus the possibility to assign effects to it.

The contactless AIR control allows you to control a MIDI command with your hand placed above the controller, depending on the distance between the controller and your hand. You can modify the intensity of one or more effects gradually by putting your hand closer or farther from the sensor (up to one foot/30 cm). This option works really well, it’s fun, but the actual control is not as precise as with a good old knob. The manufacturer took special care in using a technology (infrared rays) that work well in bright and dark environments, so don’t panic, you will be able to use it under any conditions!

Between the two volume faders we have 4 × 2 LEDs that indicate the beats of the song, which can be eventually useful to get back in track in a 16-neat loop.

The MAGIC button allows us to split a loop in for different samples (assigned to the sampler) and play with the latter. You can trigger them one by one or several at the same time, be it on top of a song, a loop or on their own. These samples can be played back once every time you touch the pad or in an endless loop.

The software features one sequencer for each deck and you can liven up your sessions with 16-beat sequences of one to four instruments (hi-hat, kick, cymbal, snare). It’s an interesting feature, but it still needs some work: supplementary options would be necessary to really profit from it (tempo sync, independently adjustable volume per instrument…).

The software recognizes automatically the tempo of the songs, but ─ like many competing products ─ its reliability is not guaranteed: sometimes you need to multiply by two the value indicated. A song with a tempo of 195 BPM might be displayed as being at 97.5 BPM. The same applies to song key detection: the software might get it wrong, but it nevertheless comes in handy to mix harmonically without the need of an external tool like Mixed in Key.

This USB controller is aimed at beginners given its very accessible price: about 230 euros. It is enough to take some first steps into digital DJing. And, thanks to the connections available, it will prove very practical since it can be connected to a Hi-Fi system at home or to a big PA system in a concert hall. Actually, the RCA outputs are unbalanced so you should refrain from long cable runs to avoid degradations. The reduced size and weight of the controller make it very movable, which will make mobile DJs very happy.

Given the amount of features of the DJ Control AIR+, its price is very interesting. It allows users to initiate themselves in the art of mixing under proper conditions, well beyond simply linking several songs. Ideal for beginners who already own a laptop!

Log in
Become a member
Viewers of this article also read...
learning How To Choose Your Ideal USB DJ Controller
review Vestax VCI 380 Review
review Gemini CDJ 700 Review
learning The Best DJ CD Decks for Around $500
learning The hottest 20 products seen at the NAMM Show 2015
learning Polishing and Exporting the Final File
learning Best Practices for Recording Your DJ Mixes
learning The 20 Hottest Products from the NAMM Show 2014
learning Setting Up Your Mixer To Record Your DJ Mixes
View all reviews