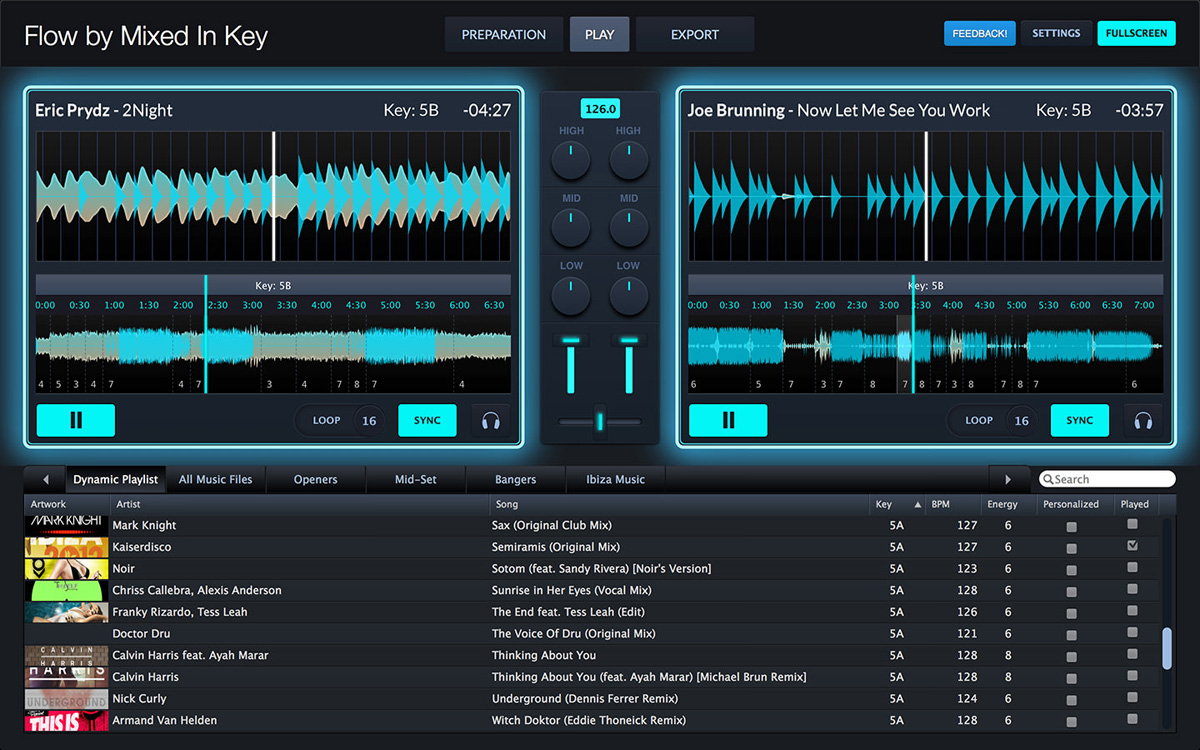 DJ Software from Mixed In Key .

The creators of key-detection software Mixed In Key and Platinum Notes continue their crusade to offer new tools for DJs. Here's their last baby: Flow. This Mac/PC-compatible application is designed for preparing your transitions and sets in advance, taking into account several criteria, like the key, energy level or the structure of a song.

Right from the start you have to enter a "VIP Code" to prove that you have purchased the software. There's no demo version and you can't test it without paying for it — a real pity. As soon as you launch the software you'll see a screen with three sections: Preparation, Play and Export, which are the three main functions. It's pretty straightforward and you can easily find you way around.

Simply copy and paste your songs into Flow and it detects the key, tempo and "Energy Level." You can analyze your songs in batch, by folders and even by iTunes playlists. The software supports several file formats (I successfully tested it with WAV and MP3).

At the bottom of the screen appears the browser displaying the files on your computer, with the following information:

You can sort files according to each of these criteria and you also have a search engine to help you quickly find the files you are looking for.

In test, the results were disappointing: Flow displayed a tempo of 97 BPM for two songs that have a tempo of 195 BPM! Key detection software tools (Mixed In Key, Rapid Evolution, etc.) often display accurate results, although divided by two. In this case, however, it is wide of the mark because if you multiply 97 by 2, you don't get 195 BPM! It's a real pity (especially from a publisher like Mixed In Key!), because it skews the whole preparation of a harmonic set, where accuracy is essential. In comparison, Traktor displayed the exact tempo.

Regarding the key of the songs, the root notes are displayed according to the Camelot Easymix System code (2A, 5B, 12A, etc.), which simplifies their use for your harmonic mixes.

In the QUALITY column there's a CLICK TO IMPROVE button for every song. Unfortunately, Flow will not process your files. When you click on the button, it sends you to the website of their Platinum Notes software, which allows you to optimize and normalize the volume of your songs. It's a shame that these features aren't integrated into Flow and that you need to buy a second application to use them (unlike key detection, which has its own dedicated software: Mixed In Key).

When you drag and drop a song into the upper side of the screen (Prepare your music), Flow divides the song into visual segments (which means it doesn't actually touch the original file, but rather adds some sort of CUE points), depending on the energy and the structure of the song (breaks, major instrument changes, etc.). The idea is to clearly separate the different sections of a song to be able to use them later on (which we'll see in a moment).

Flow adds a visual marker (called Segment) on the waveform of the song in question, on the first beat of every break or on the first beat of the outro, for instance. Even if these Segments are placed automatically and arbitrarily, you can delete, move, and even add more of them (right click Split Segment; you can zoom in to place them accurately). For every segment, you can manually define their key and energy level (from 1 to 10).

In my tests, the software wasn't very precise when it came to dividing a song into segments. For example, I had the end of a break and the restart of the normal rhythm (with all instruments) in the same segment, when they should've been split. The starting points of these segments seem to be pertinently placed (the moment a 16-bar loop begins, that is), about two out of three times, so you'll be forced to correct some of the segmentation manually.

For its part, the evaluation of the energy level of the segments lacks pertinence. For example, a "mini-break" gets 7 points out of 10, while the normal rhythm with all instruments goes down to 6 (instead of going up). Once again, you will have to review it manually if you plan to use this feature.

Finally, you can add a comment to each segment if you want to jot down anything to remember later.

The Check Downbeat button allows you to immediately launch the playback of a song from the place you define as the beginning.

As soon as your song is ready, you can click "Mark this song as Personalized". That way, you'll quickly be able to tell which songs are ready and which ones aren't from the song list. Very practical! Everything you do in Flow is automatically recorded, which is reassuring and saves time.

To play back a song, you only need to drag and drop it into the left or right Deck. The waveform of the entire song is visible at all times (without the possibility to zoom in, unfortunately, so good luck if your segments are short!), while a zoomed waveform scrolls in real time (as is usually the case with DJ software).

Flow displays the segments you defined while preparing the song. This allows you to quickly playback a part and link it to another part of the same song with a click (even if the two parts seem unrelated) in order to go directly from the intro to a break. It works as if you've used CUE points.

You can easily chain parts in ascending order according to their Energy Level, for example, while everything stays perfectly in tempo (thanks to the SYNC function). But that's in theory, because once again there is a tempo detection problem here: The value displayed in the song list (97, in this case) differs from the one displayed on the top of the mixer (97.5). The latter can be manually adjusted to one tenth of the BPM, if necessary.

You can "cross" possibilities to test transitions in real time with a second song, to test progressive transitions, for instance. Thus, you can go from the intro of song 1 (left deck) to the second break of song 2 (right deck), keeping the tempo in sync (with the SYNC button) and adjusting the volumes (faders and low/mid/high knobs).

It's always possible to go back to the Preparation of your songs in order to move the segments, for example, and benefit from such modifications when you go back to the PLAY section of the software.

When it comes to mixing songs while being limited to 16 beats (which you can compare to beatgrid alignment), you can set some criteria, like waiting till the end of the current measure (four beats) before playing back another section, or even the maximum duration of a progressive transition (one beat is the smallest duration possible, which is too long and too audible for certain music styles!).

A basic mixer is included to correct the volume of songs (with line faders and a crossfader, but no gain) and the volume of the lows/mids/highs (via knobs). Unfortunately, there is no VU-meter with graduated scale available, which would've been very helpful. The knobs and the faders aren't graduated either, so there's not much precision to them.

You can pre-listen to each deck on your headphones, but there's only an ON/OFF function. You can't adjust it in a progressive way like you can on real mixers.

It is possible to connect a MIDI controller to Flow so you can control the knobs or the faders, among other things, which is ideal to test your transitions with your hardware! Several controller models are supported (Native Instrument, Allen & Heath, Pioneer...), and you can also customize the mapping to your needs.

A basic LOOP function allows you to trigger loops of 1, 4, 8, 16, or 32 beats on the fly, and you can shorten or extend them during their activation.

In the song browser at the bottom of the software, the Played column indicates whether the song in question has been played or not during your current set.

The combination of all these features allows you to test your mixes, song parts and even your transitions, with a clear head in order to apply them in real life during a set with turntables or a mixing software (Traktor, Serato, Virtual DJ, etc.).

The third and last section of Flow is divided into two parts:

Flow ($58) was conceived for professional DJs, but it will be more useful to intermediate DJs who want to remix live, or who want to take control over the slightest details of their sets. It is not mature nor comprehensive enough in terms of features and reliability to be used by professionals.

Flow isn't meant to be used to mix, like Traktor, Virtual DJ and others, because it lacks many options (effects, the use of four decks, remix decks, etc.). It won't replace your favorite software, but it can complement it, especially when it comes to preparing your sets.

This first version of Flow needs some development and it definitely lacks maturity right now, but it can still prove to be quite interesting for meticulous DJs.