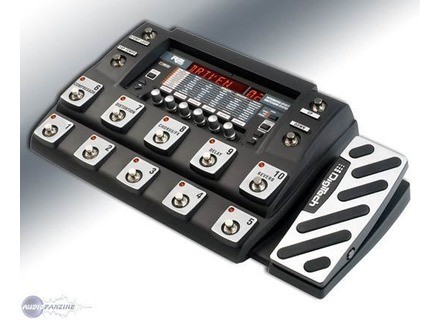 RP1000, Multi-Effects for Electric Guitar from DigiTech in the RP series.

Buy this productView price information >
View other reviews for this product:
Everything has been said, Digitech offers a good string of cable used to Method 4 cables
2 ~ 60 centimeters (probably to put the pedals in the loop)
4 ~ 5m (for 4 cables)
(I have not measured: p)

Good otherwise level effects there is a choice, the exact number I do not remember, but there it takes
10 foot-switch, 5 that may have attributed to presets, or indeed in the same preset
An expression pedal
A looper .. etc ...

Should take 15 minutes to learn to use, and then it goes all alone!
And when I say learn how to use it, is that 2 three little detail, there is a very clear display and a screen (against the parameter marked in the table under the screen due to changes in particular in the "Chorus / Fx "are not the same at all depending on the effect selected, the screen is there to correct)

If this is not straightforward, Digitech has launched a software RP1000 and adapt to other products in this series (X-edit) makes use much easier!

Section expression, we talk enough, I discovered the software allows even more versatility, let me explain:
An effect that does not have the RP1000 is the boost! So to overcome a problem is, I copy a preset I create and increase its output level!
However, the "expression" can bound to each foot-switch and expression pedal a setting such as an increase in the volume of the amp simulation
Now I just example with foot-switch "Chorus / fx" passed the simulated amp volume from 60 to 75 (which therefore gives a boost!
I can also with a footswitch, past a Whammy Divebomb, has a one octave with the expression pedal while on foot concervant effect whawha which engages with pressure on the pedal for 3 preset function has the expression pedal!

Speaking Pedal whawha we just happily adjust the sensitivity (on the other hand must seek it in the manual: p) because during my first grip of the camera, she could not stop to engage disengage ..; suddenly drop in volume with the expression pedal ... short it was unusable
(I set the sensitivity to 25)

Creating preset is very easy, and we can shape vraiement sound as desired, provided to know the amp / effect simulated look good but it is also a fun aspect to Multi effect

We also record with Cubase little, but there are adjustments to make, I spend 2 nights a look ... but requires good recording software

Once connected to the computer, the sound is in the multiplayer, and you can have the headphone both his guitar, and the times that the computer (and music which are played by above

) It would not but it is very convenient, especially for me who must limit noise and still wants to play at midnight: p

The looper 20 seconds is really good, but TOO SHORT! (But when you can save on cubase, it is no longer a problem

Aaaah sound! it is the first thing that interests us!
So I immediately said, I have very rarely play on a lamp amps, much less have to push this kind of gear
I said right away because have often speaks of "the heat" (aaaah terrible debate) I have not had the opportunity to hear, but I think people like me there many, becaufe not a super every wallet in the hands to afford machines dreams

So yes, the sound is cold ...... the first try, because I have not put much! After just adjust the bass, which still adds warmth and comfort to her, you push a little, adjusted the factory presets, they exchange our taste, and there can not be disappointed!

(The factory presets, they are more or less good, but are there to be taken and to amend or to present its)

I play a lot of headphones, not practical to adjust the sound according to what we would like to hear a speaker, but the sound is not disgusting, it depends on the headphone, settings etc ... (I&#39;m not a Boulet with Equalz yet, but I&#39;m happy: p)

Level models .... I can not help you, I do not have great knowledge in gear, so I can not tell you if it is similar or not, some say yes (those who want to defend their gear), other say no ( purists) then decide where?? Well someone has rightly said in a forum "if we could get exactly the sound of legendary amps has more than 1000 toy balls in a ball that has 300 to know! Was not on its exact amps and effects, but enough to change the situation "(quote not exact but hey ..) this is what I am Cliff versatility!
Oh, and I was playing tender surrender the headphone with Steve Vai Legacy of a simulation prepared by my care, and the sound was really good, but true-ing very closely (yes the headphone, modeling, one amp great guitarist, I&#39;ll get slaughtered by some, but I swear!)

The reactivity of the lamps (non-existent) is the JCM800 simulation (for example) can go into clean by lowering the volume knob on the guitar, and conversely, a clean sound that crunch when you attack the strings hard, very fine ! It was a pleasant surprise for me is first and foremost a big fan of Jimmy Page, who played a lot with it! : D

the acoustic simulation ... she gave me a little disappointed, also the simulation of low origin, I had to have a tamper to my taste

Another negative point, but maybe this is my ignorance, rather than an error in the RP1000, all the presets (or almost) is a noise gate enclancher and IMPOSSIBLE to hold long notes without it either after 2 / 3 second considered a parasite .... but hey, we turn the NG and cons it rolls by strong feedback when (in a room 8m ² at the same time ...)

Honestly not disappointed, I was afraid of bad surprise my first approach, but once it&#39;s published his happiness! There are too many choices, and I&#39;ve created the sound that I like, and I do not see what else create, but it&#39;s one week that I have and I spend my free time on it (my homework ? KEZAKO?) I play a lot, I discovered her, I experimented ... really great! I was afraid to throw in the 350 € cash through the windows, well I do not even think about the money that has happened!
It is plug and play as a multi purpose, and frankly it did nothing disappointing, I did not expect a better course there are disappointments (and writing that I can not see anything too) but also very good surprises!
If you are interested, dark!

Sorry for my spelling and syntax errors: S
See the source
Did you find this review helpful?yesno